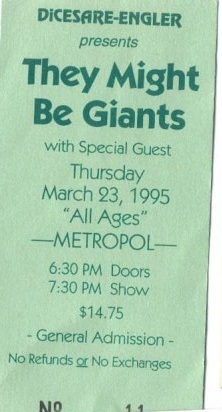 No one else has posted here, so let me see what I can dredge up.

The tickets were a present from my then-girlfriend (wife since 1999!) - we had been dating for two months. We took the bus downtown and walked over to Metropol - I had previously seen TMBG in 1992, so this was my second TMBG concert. I had never been to Metropol before, but had heard about it many times. I had been a poor college kid and only managed to get my hands on John Henry only a few days before the concert. I listened to it closely but didn't have many or the songs down pat in time for the concert.

It was pretty crowded. The crowd pitched and moved - we were both worried we were going to fall over for a bit. I'm really tall (6'4"), and as Murphy's Law would have it I was behind a guy with a backpack who was taller than me.

Ivy was the opening act. They were okay, but their bass was far too loud - my bladder was shaking with each note. I thought it was just me until people started yelling to turn down the bass, which they did.

Concert was good - I remember little of the actual show, sorry. Flans did ask about The Electric Banana (which they would nine years later mention in the Venue Song, Pittsburgh) - he asked if the place was still open and a few people nodded. (It closed in 2000.) He replied "What are you doing here when you could be there?"

On the walk back to the bus stop I was singing "Snail Shell" to myself as we passed the convention center when there was a movement in the bushes - my girlfriend and I booked as if we were going to be mugged. It was probably just a homeless guy, but to this day we remember that bush.