From This Might Be A Wiki
< Shows
3 wikians attended: Alucard1137 Cheshire monkey Gene Warren 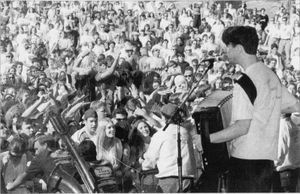 From The Stanford Daily: John Linnell of "They Might Be Giants" performs before a crowd of about 4,500 at Rinc-a-Delt yesterday afternoon in Frost Amphitheater.

This show was a part of Stanford University's 20th annual "Rinc-A-Delt" festival. Tickets were free for Stanford University ID and photo ID holders and $12 for non-ID holders. Accordion to the first advertisement article, Doors to Frost was said to be the opening act, but they ended up being replaced with Brian Dewan and Frente! In a May 1995 Stanford Daily article, it was mentioned that They Might Be Giants drew over 6,000 people to this show.

Innovative pop duo They Might Be Giants will headline the 20th annual Rinc-A-Delt event, organizers announced last week. Scheduling for May 15 at Frost Amphitheater, the concert will be free of charge for registered Stanford students, making it Rinc-A-Delt's first free concert in Frost Amphitheater.


They Might Be Giants, lead by guitarist/vocalist John Flansburgh and accordionist John Linnell, are currently in the midst of a nationwide college tour. Their unique lyrical style and playful approach to musicianship have garnered rave reviews, ranging from the LA Weekly's description of the duo as "cheesy in the most profound way possible" to the New York Times' "mentally hyperactive and proud of it."
Rinc-A-Delt, one of Stanford's best-known annual parties, came into existence 20 years ago as the brainchild of several Rinconada freshmen. Having since combined forces with the Concert Network, it has hosted major names such as the Red Hot Chilli Peppers and Phish.
Freshman Tammie Glass, the event's co-publicity coordinator, emphasized that the goal of keeping this year's concert free was central in Rinconada's planning. "It was very important for us to make the show free to all students," she said. "We have been pretty successful in our fundraising efforts and decided that Stanford students pay for enough on this campus."


To achieve this end, Rinconada has initiated several fundraising campaigns over the past few months, including the sale of roses on Valentine's Day and current dorm solicitation efforts. According to Sasha Aickin, another publicist, steady progress is being made. "Rinconada has raised about $4,000 up to this point, and we're hoping to end up at around $7,000," he said. "Other expenses will be taken care of by the Concert Network."
Colton declined to estimate how much the Concert Network will spend on the event, but said that "our approach to Rinc-A-Delt is that it is a service-oriented concert" and that organizers simply aim to break even. In order to be admitted to Rinc-A-Delt '94, all Stanford students will require a valid Stanford ID and a photo ID. For faculty, staff and the general public, tickets are $12 and are currently on sale at the Tresidder Ticket office and all Bass outlets.


The concert is scheduled to begin at 2 p.m. and will include an opening act. Doors to Frost will open at 1 p.m.