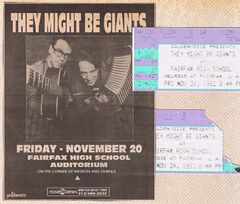 Setlist: (Incomplete and likely out of order)

The song "O Tannenbaum" (later released as a single) was recorded during the soundcheck for this concert, held at Fairfax High. (The back cover of the single erroneously lists the venue as Hollywood High, but They Might Be Giants In Holidayland correctly lists Fairfax High.)

I saw They Might Be Giants in concert this past Friday at Fairfax auditorium,

with the Young Fresh Fellows opening in L.A.
The first surprise of the evening was when I walked in the entrance, and lo, there before my unbelieving eyes was "Weird Al" Yankovic!!! He was there obviously hear another great american accordian band. I thought he might be sitting right in front of me, but it turns out he was on the exact opposite side of the auditorium. (end of weird al news, rec.music.dementia can now hit "j")
As for the bands, the Young Fresh Fellows were pleasantly surprising, much more complementary to TMBG's sound than Freedy Johnston was when I saw them in August. They played a most rousing version of "Taco Wagon", which is sort of a cross between "Frankenstein" and "Tequila".
TMBG finally came out and opened with "The Guitar". It was a pretty "hit" filled concert, with the occasional rare gem such as "Hide Away Folk Family" "Toddler Hiway", and from fingertips "I'm having a heart attack" (a personal experience, according to John L.) The only thing I'm hyper-bummed at, is that I've only heard them perform "Put your hand inside the puppet head" once, and that was a few years ago. It sounds fabulous live.
For the "spin the dial" section of the program (the "nader" as John F. put it), they sang a splendid version of "I wanna know what love is" by Foreigner. Something about, "I stopped to ask a guy for directions, when I was driving my car, and now it is his car".
Again, they played the funky Istanbul, for one of their encores. We had a party of 9 people go, ranging from the hard-core fans to some casual listeners. As much as I enjoyed the show, I think the casual listeners had a better time, due to the fact that they were blown away by how good the band sounded.


All in all, a good show, that I would recommend to anyone.