From This Might Be A Wiki
< Shows
3 wikians attended: Curiosity MrXcitement Silver Chauffeur 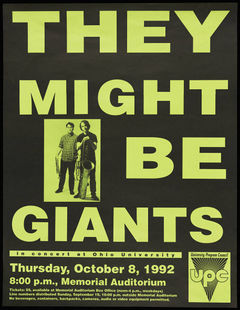 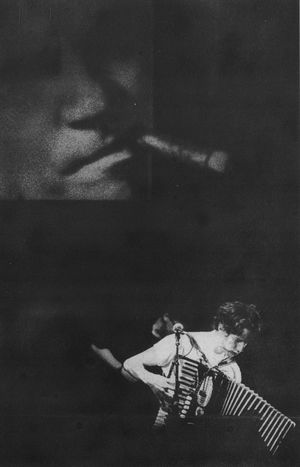 From the Post: John Linnell, accordion, brings the crowd to their feet Thursday night as They Might Be Giants packed in about 1,300 fans at the Memorial Auditorium. The show was sponsored by UPC. (Photo by Matt Detrich)

Said "Paul the sound guy" of their afternoon sound check, "Just like they always sound at sound check — very quiet."


But last night They Might Be Giants illuminated Mem Aud in their UPC-sponsored concert with bright and brassy sounds and spun it into a merry-go-round of good feelings. The "quiet" group poured pure volume for nearly two hours. Sporting black jeans and their own concert T-shirts, John Flansburgh and John Linnell had the close to 1,300 fans on their feet and dancing by song three, "Twisting." Freeze-frame white lights and stop-go rhythms that pumped the place made the experience all-encompassing with not a bad seat in the house.


Throughout the show came cries for a 30-second ditty called "Minimum Wage" but the band responded with something of their own choosing: Stump the Band.
The object of Stump the Band was to request a song They Might Be Giants had never played before. After the band rejected "Copacobana," a member of the audience shouted for ZZ Top's "The Grange," which won out.. The band was booed. But there was nothing to really complain about. Perhaps the lighting crew could have injected a brighter, white lighting, but They Might Be Giants is the real product. They can pull a piece of magic from their pockets, but they're not out to fool anyone. No laser light show, no colored smoke and no 10-minute drum solo.


Enthusiasm radiated most in response to older songs from Lincoln and Flood. The jovial bop "Particle Man" and knee-slappin' sing-along "Cowtown" were golden. Saved for the seven-song encore were obvious favorites "Birdhouse in Your Soul" and "Istanbul" — the experimental, extended version. Apollo 18 hits had their place, as well. The set kicked off with "The Statue Got Me High," their light and happy single. And no one could resist swaying to "The Guitar" as the Johns harmonized the remake effortlessly.
By song #21, "Don't Let's Start" the audience was hanging on, afraid any moment the band might leave the stage. The last song, "Dig My Grave," led to a mini-mosh, screaming, and lighters in the air to prompt an encore. The encore itself was slow at first, but things shook up with "Istanbul" and an audience-participation version of a Brooklyn car alarm.


Before the Giants, two members formerly of Jody Grind opened with one electric guitar and two vocalists. But the crowd was too wound up for this near acapella style where rhythm and lyrics became lost. Fans were ready to rock but they just rolled along. Assistant director of Student Activities Rick Danals said, "This is the first show I've worked on that has been truly a student production. Kathy (Ferrera, UPC concert chair) and her committee have taken ownership of this and have handled all the details, which is exciting from an advising perspective," he said.