From This Might Be A Wiki
< Shows
1 wikians attended: ToddMightBeOld 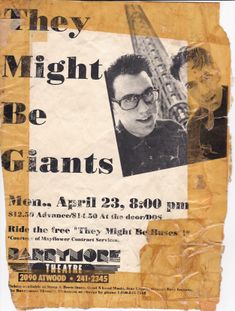 They Might Be Giants
— with The Jack Rubies opening —
Barrymore Theatre in Madison, WI
April 23, 1990

Opening up with three songs from their latest record, "Flood," the two Johns did take a little while to get going. But when Flansburgh introduced their "famous rock metronome" and Linnel donned a bass saxophone for the delightfully dorky "Lie Still, Little Bottle," the duo loosened up as much as the crowd.

Surprisingly, the lack of a full band only occasionally made the songs sound empty. Flansburgh's guitar on "Anna Ng" and "Purple Toupee" (which he introduced as a "folk song we learned while we were in hell") dished out enough sonic force to make up for the lack of accompaniment, and even "Istanbul (Not Constantinople)" worked well despite the absence of violin and trumpet.
It was clear that the crowd response took the duo a bit by surprise, too. While Linnel remained silent between songs, Flansburgh bantered with the audience, often without the help of his microphone, creating an audience-performer relationship free of the barriers one finds at most pop shows.
Flansburgh's guitar playing was completely out of control, as he bounced around the stage like a kangaroo on speed. At one point, he even took his guitar off his back and bounced it, strings down, up and down on the stage.


Despite their new-found popular audience, TMBG hasn't gotten any less bizarre. When someone in the audience jokingly called for the band to play Lynyrd Skynyrd's "Free Bird," Flansburgh replied, "No, we haven't gotten that bogus yet."

Guitarist John Flansburgh and accordion squeezer John Linnell of They Might Be Giants were an instant hit with an opening instrumental best described as New Age-movie theme-pop-funk-metal.

Most of the audience was on its feet and filled all the available floor space up front before the Brooklyn-based twosome made its entrance.
With Flansburgh's announcement, "All hail the new king," the crowd became a congregation of human pogo sticks for "Particle Man" from the duo's newest 19-track release, "Flood." It served as an accurate introduction to the way these two think when assembling lyrics, particularly when it was mentioned that the song's "Universe Man" has a watch with a minute hand, a millenium hand and an eon hand.
Things abruptly turned to more serious matters with "Your Racist Friend," a happy song about an unhappy topic.
Paradoxes collided constantly in the TMBG's show, but the guitarist's frantic style perfectly matched the exaggerated angst of "Somone Keeps Moving My Chair."
Many of those closest to the stage bounced as if on individual trampolines for the twosome's breakthrough hit, "Ana Ng."
Linnell, who handled the majority of the vocal chores, cut through the surprising din with a sharp nasal tonality to his voice. Although his partner handled his own vocal chores well, his best stuff was performed as he bounded, danced, ran and stumbled around the stage flailing his left-handed Fender Telecaster.
Most of TMBG's humor took close attention to absorb, but "Istanbul (Not Constantinople)," a pre-rock '50s hit, was grandly camped up.
Flansburgh's psychedelic guitar work was powerful and popular with this crowd. Linnell's psycheedelic accordion, however, was as amusing a twist as the use of metronomes to keep time when the duo wasn't playing along with prerecorded tapes.


If depth of thought wrapped in off-the-wall humor has any market value, these guys just might be giants someday.