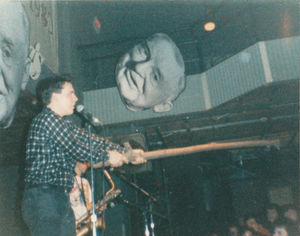 John Flansburgh of They Might Be Giants holding The Stick outwards towards the crowd.

I went to this, my first TMBG show, when I was only 16 at a local New Orleans bar/club called Tipitina's. At the time N.O. had a loophole in their drinking law so that you could go to a place that served alcohol if you were 18 or if under 18, with a parent or guardian. So, I made my mom wear some of my clothes so she would "fit in" and off we went.

I was so excited and there was only about 100 people at the show. I had been listening to TMBG non-stop before the show and stood right in front of JL and sang along with EVERY SONG! There was a nice sing-a-long for "hope that I get old before I die". This was when they were still wearing the carpet hats on their heads and playing to a backing tape.

I noticed JL staring at me strangely throughout the show, 1. probably wondering "boy they sure let young kids in bars in N.O." or 2. how in the heck does this kid know all the words to the songs?".

Well, the answer was 2. I know this because a local college radio station, WTUL, had a photographer for the college paper there and he escorted myself and a friend up to the "backstage area" to meet TMBG. I was 16 and freaking out. I'd never met a musician I had liked before and didn't know what to say or do. So, I went in and said hello, asked if they enjoyed the gig and N.O. and then, finally, "could I get a hug from you guys?". They both obliged and hugs ensued. I also asked "what are you doing now? Going out?". Like my mom was going to let her 16 year old only daughter go off with a college photographer and 2 guys in a band! They were off to Florida for the next show and weren't staying in town. I had them sign the gig flyer and off home I went.

As far as the tunes, they played mostly from their first record and also some new tunes from the upcoming "Lincoln".

Oh, and their hair/heads were very sweaty from the carpet hats.