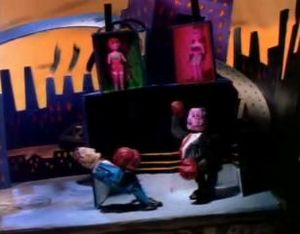 From the video for "Istanbul (Not Constantinople)"

Mark Marek (not to be confused with the nude photographer of the same name) is a cartoonist and animator whose animations and drawings have been featured in popular media.

Marek created the cover and label art for the (She Was A) Hotel Detective (EP) in 1988 and stop-motion characters and set for the official music video for "Istanbul (Not Constantinople)" in 1990, collaborating with J. Otto Seibold. He also designed the early TMBG T-shirts, "Hayseed Johns" and "Worker Johns."

In 2015, he animated the music video for "Underwater Woman" for the 2015 iteration of TMBG's Dial-A-Song project.

Marek was also a character designer and director on the Nickelodeon cartoon anthology series KaBlam!, which in its 1999-2000 season showcased videos for "Doctor Worm" and "Why Does The Sun Shine?".