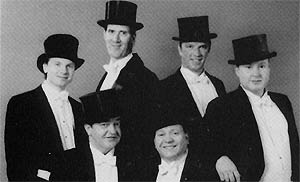 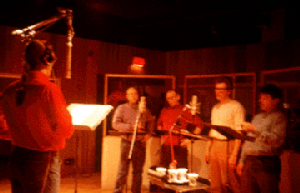 Recording "O, Do Not Forsake Me"

Hudson Shad is a New York vocal group who formed in a room above Brooklyn's Fulton Fish Market in 1992 (hence the name). They have been called the heirs to Germany's famous Comedian Harmonists, among other things. The group consists of:

Giants fans know Hudson Shad for their stirring rendition of "O, Do Not Forsake Me" from the album John Henry. John Flansburgh had been unsatisfied with a demo version of the song recorded with him singing. Around the same time, John Linnell saw Hudson Shad perform, came back raving, and suggested hiring them for the studio version.

Hugo Munday was one of the extras in the video for "Birdhouse In Your Soul" back in 1990, two years before the formation of Hudson Shad, and four years before they appeared on John Henry.