From This Might Be A Wiki
< Shows
5 wikians attended: Ecks Fallen head Jamskes Kassi Wonderpay 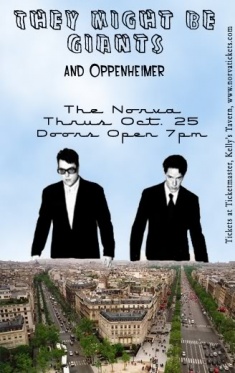 My first (of many, hopefully!) TMBG show...it far and away exceeded all the expectations I'd been building up for years. There wasn't anything at all that was lacking. For one thing, I don't think I've ever met a friendlier group of people than TMBG fans. The pre-show music was probably the best I've ever heard. The opening act, Oppenheimer, was amazing...they really reminded me of an Irish indie-rock incarnation of Them. (Really, what's not to love about a band with a song with an airhorn solo?)
And, of course, They were unbelievable. Every song was totally on-point, and the set list was perfect. You could definitely tell that They were just playing what they wanted to - seeing any one of the guys (Linnell in particular) smile while they were playing was just beautiful for some reason. Aside from She's an Angel, They got to every song I wanted to hear. The banter was wonderful - sort of made me want to have mini-Johns to put in my pocket so I could always have it with me, you know? ;]
Marty came out after the show and gave low-fives/handshakes to everyone in the front row...he asked about this stupid little tiara I was wearing (my friend got it for me 'cause it was the night before my birthday), and having explained it, I now can say that Marty Beller was the first person to wish me a happy birthday...if that's any indication, I'd have to say that seventeen is going to be a good year. :]
I'm sorry if this is at all incoherent and grammatically awful, but honestly, I'm still completely speechless. I don't know that I could have asked for a better present!