Vibe Report is a term used for many years in TMBG announcements to promote upcoming shows or projects. Starting in 2018, live video Vibe Reports became a regular feature of TMBG's social media presence on Facebook, Twitter, and YouTube. 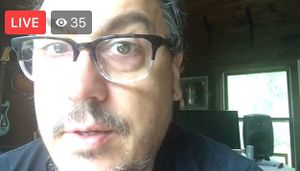 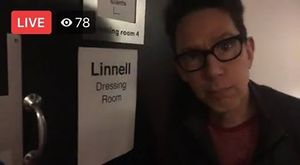 Linnell by his dressing room during one of the Vibe Reports

TMBG kicked off 2018 with a new iteration of the Dial-A-Song project, and promoted it (along with upcoming tour dates) with a Vibe Report video posted to YouTube on January 1.[1] Soon after, John Flansburgh began using Facebook Live and the Periscope app to stream live Vibe Reports.

Flansburgh is known to occasionally identify viewers by name as he acknowledges or reads their comments. On rare occasions he's sung a TMBG song, such as "Absolutely Bill's Mood" on a cab ride. Often he'll sing and riff upon a recurring theme song for the Vibe Report ("Vibe Report, it's a Vibe Report, but what if there isn't a vibe?"). Occasionally he'll use camera filters to make himself appear in unusual garb, with amusing fake appendages or makeup, or other psychedelic effects.

There are also occurrences of spontaneously-streamed videos of other events, including portions of shows, soundchecks, radio interviews, and the band and crew backstage or on the tour bus before and after shows. Some of these videos also bore the official title of "Vibe Report," although they did not technically include any news being "reported" on.

Vibe Reports have also appeared in several e-mails for the official mailing list, such as April 10 and June 15, 2018. The vibes were described as "very good" both times.

In 2019, Flansburgh explained the origin of the "Vibe Report" name:[2]

Years ago there was a radio show on weekends on WFMU in the 90s where a fellow named Roscoe (who I believe was in a band called the A Bones) would call in from wherever he was hanging out and it was referred to as the Vibe Report. When I start posting spontaneously I casually appropriated it since the stakes couldn't have seemed lower. Now I kind of feel dumb not to have cooked up a more original title, but like the Quiet Storm (also a casual nickname taken from an unlikely but established source) it quickly stuck.

JF: So John, how was your day?
JL: It was crazy.
JF: Time for the Vibe Report. Did you ride your bike around?
JL: I did ride my bike around. I noticed they're building gigantic crazy buildings where none were before.
JF: Yeah, they're doing that in New York, but it's bad.
JL: It's kind of a stone dumper.
JF: John, not the dumper.
JL: Sorry, I meant to say the toilet. So, god bless everybody is all I gotta say. God bless the developers. They all love their mothers. They're beautiful people.
JF: God bless Live Nation, and that is the Vibe Report.
JL: A carefully rehearsed skit.