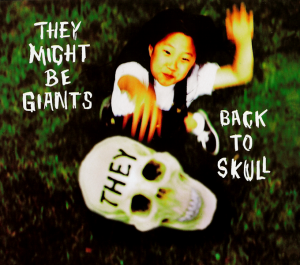 The Back To Skull cover art, with "THEY" engraved on the skull's forehead

They Day occurs on October 11th every year, in a tradition practiced as far back as 1999. Fans of They Might Be Giants write the word "THEY" on their forehead to showcase their love of the band. The word "THEY" is meant to be written in the same style it is on the John Henry and Back To Skull album covers. The idea behind They Day is to dedicate a full day to supporting They Might Be Giants, and to find other fans in the area.

Ideally, the day after They Day, October 12, should be celebrated as Boxing They by They Might Be Giants fans Canadian and non-Canadian alike, whereupon one draws a box around one's "They" from the previous day.

They Day should not be confused with TMBG Day or Too Much TMBG Week, which John Flansburgh tends to declare at random intervals on Tumblr, Facebook, and the band's other social media presence.