From This Might Be A Wiki
< Shows
1 wikians attended: Dr Raygun 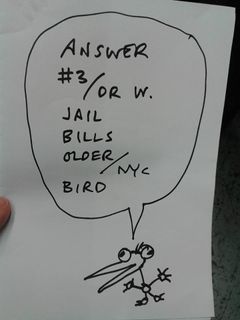 I was so thrilled when this concert and in-store signing was announced as it came at the end of a glorious week for me which included a three day stint at the Kent County (agricultural) Show, my doctoral graduation (and stay in the incredible Shangri-La Hotel in London's Shard building) and three days as a guest at the London Film and Comic Convention (well, my husband was the 'real' guest and I am somewhat of a hanger-on in this context)!

Not really knowing what to expect I rushed up on the train to London — after having a final set of photos taken at some of Brighton's seaside landmarks in my academic robes before I had to return them — and got to the store around 4.15pm. There were several other fans there, easily identifiable by their t-shirts and big smiles, and after a quick bite to eat (a weird halloumi and salad wrap with chips — fries for you US folk — in which the chips were placed *inside* the wrap?) we formed a queue of two people. Chatting away we missed the band's tour vehicle approach, but we caught a glimpse of Linnell in the store and Flans looking at some records. There was a little uncertainly as we were told conflicting information about whether or not the venue was going to shut and all the people inside the store get kicked out, or whether those people who were lining themselves up by the stage were in fact going to be allowed to stay there and we would not get into the front row. But good old British queueing prevailed as they *did* throw everyone else out for a sound check at 6:30 and we maintained our positions at the head of the queue. I managed to get possibly the best position right at the middle in the from row, literally inches away from the band and about two feet in front of Marty who tweeted a lovely photo (with me right in the middle).

They started with 'Answer' which is probably my favourite DAS/Glean song and followed up with 'Number Three' and ' Dr Worm'. 'Music Jail' was followed by a trio version of 'Bills' which baffled, entertained and awed the crowd in equal measure. 'Older' made us giggle and 'New York City' had us rocking out. Flans gave a long speech about how they would stay and sign absolutely everything and suggested that those with their entire TMBG collections with them should take a break and imbibe an adult beverage before returning in about 45 minutes to let those with only one or two items get their items done first and leave. They then concluded their set with 'Birdhouse'. The (very British) crowd then ambled away to the signing desk and I had to call a very nonchalant roadie over to ask for the set list - no-one seemed the slightest bit bothered about asking of them except for me, so my chum Jill got Marty's and I got Flans'. She was thrilled as although a long term fan she hadn't been able to get hold of any of her memorabilia to get signed.

We heeded Flans' advice and headed to the bar for a drink, and then returned to the venue where we queued for another 50 minutes. As we approached the head of the queue a reverential silence seemed to descend on the queue-ees. I had managed to get my items down to only five and as I sat down Flans asked me about my hair colour; Linnell grabbed my poster tube and he and Marty started signing it before I could explain that it was the things *inside* that I wanted autographed. Linnell pointed out the set list that I had written on the tube and asked Flans if he had written it there; I then made a joke — which in hindsight might have been a little ill judged as somewhat creepy — that it was my handwriting but I had been studying Flans' for years. But the highlight was the photo which I had brought along of myself with Flans at the UK Apollo 18 press party 23 years previously. They all thought this was hilarious with one of the Johns saying "look at us babies!" And much hilarity ensued. Flans insisted we had a 'then and now' photo taken and Linnell found the whole thing so funny I said I would stick the original photo up on the band's Tumblr if that would make him laugh.

I did get a bit tongue-tied with Linnell; I couldn't find words to tell him how much their music means to me and how grateful I am they are still producing such top-quality work. But I did get to shake his hand and tell him he was amazing. There was a final bit of banter with him and Marty about my uke; Marty was very gracious about me not wanting his sig. on it and Linnell joked that I wouldn't want to raise the value too much.

A group of us wandered back through the East End streets to Liverpool Street (this was all my old stomping-ground from when I was an undergraduate so very sentimental for me) and a seamless train journey home concluded what was probably the best 9 consecutive days of my life!

Great Article DrRaygun
I didn't go for childcare issues, but wow, what a great review of it all. It sounds great. I met Flans back in 2001 and I got similarly tongue tied. (Mr Tuck)