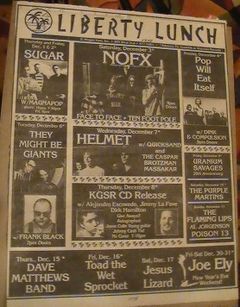 The band performed with the Velcro Horns.

I attended this show with my future wife. We were right up front. The show was great. I found out from my wife that at one point the crowd was pressed together so tightly that she was lifted off of her feet and was held suspended in midair by the crush. I hung out backstage after the show, but I didn't get a chance to speak to the band. They seemed busy and I didn't want to annoy anyone. I still have a very vivid memory of the two of them getting into a black Lincoln Towncar with New York plates, with Flans behind the wheel driving off into the night. The music video to Hotel Detective immediately came to mind. -Progcode

I'll bear witness to that story about the crowd being pressed together so tightly that we were lifted into the air. That absolutely happened during both "Stompbox" and "Dig My Grave". I remember remarking to my girlfriend that if they'd played those two songs back to back we'd all be dead. I was about 16 and it was sort of terrifying, to be honest. -Kris Wright