From This Might Be A Wiki
< Shows
3 wikians attended: Rabelcheth Relph Shaie 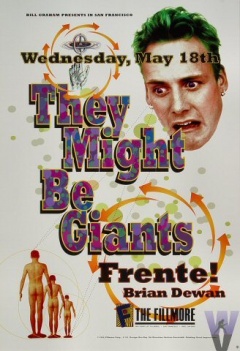 They Might Be Giants
— with Brian Dewan, Frente! opening —
The Fillmore in San Francisco, CA
May 18, 1994

So, the bored-waiting-for-concert-to-begin chatter resumed until the first opening act came on at 8:00. Brian Dewan, player of the electronic zither, started out slow, with the crowd giving him a hard time, but he won the crowd over with numbers like "Wastepaper Basket Fire" and "99 Cops," quite wacky in their own unique way. If you like TMBG, you will like Brian Dewan.

Then we engaged in bored-waiting-for-concert-to-resume chatter, until Frente came on. Now, if you've heard these Aussie kids' cover of "Bizarre Love Triangle" on the radio, you know what the lead singer looks like, because she looks exactly like her voice sounds. Like a five-foot-tall Tinkerbell. She was so gosh-darned cute I almost wanted to strangle her. Problem was, her cute little voice didn't carry so well over the very exuberant guitar. And it seemed, from what I could hear, that the lyrics are the strong point of Frente's songs (not that the instrumentation was bad or anything)--ballads and quirky little diddies, which were about 30% understandable. They needed more volume on the lead mike. Was still a good set, but not as good as it could have been.

So, Frente cleared out, and it was about 9:30 or so, and we were ready to either fall asleep (this being Wednesday night, after all) or hear some TMBG. After what seemed like an eternity of waiting, during which those degenerates who had not come early and waited in line and suffered for the privileged spots up front now saw fit to push and elbow and shove and grunt and fight their way to the front--but not past me, dammit--crowded us against the stage. Liz came forward, asking plaintively to be let through, saying "Can you let me through? I'm the Birthday Girl," at which point, Steve turned and said, "Hi, I'm Steve," at which point Liz said, "Oh, hi, *Steve*!" So now we were packed in like cattle at a slaughterhouse, just waiting for the guy with the sledgehammer and chisel.

And did we get hammered. TMBG came on and played some songs, but I don't remember what they were. A security thug was about all I had time to see, because the idiots who came late and pushed their way up now saw fit to start a mosh pit in their new spots. I am 6'1" and 190 pounds, and enjoy a good limb-tearing slamfest as much as the next humanoid, but there were people around me, with whom I'd been chatting for three hours now, who most emphatically *did not want to slam* and had no intention of doing so. So Steve and Brian and I linked up, me the anchor holding onto the stage, and tried to keep the moshers from crushing us and our new acquaintances up against the amps.

We did pretty well for a while. Steph from Sacramento held my new shirt for me so I could have both hands free; a fellow whose name I never caught was my right flank guard, grabbing me once so I could keep my place; the folks in front of me helped me keep my balance and what remained of my sense of humor. But it didn't do much good against the stampede of mindless adolescent flesh we were faced with. I got kicked in the head; Brian nearly lost his jacket (and nearly lost his arm when he bent down to pick it up), and Steve and Brian were both bowled over by a crowd-roller (and subsequently separated from me). At that point I lost my temper and punched the roller in the ribs, at which point the stage thug yelled at *me* for being *violent*. *sigh*

Y'know, you could say it was all just good clean fun, but when the *band* stops in the middle of a song to say (John Linnell), "Look, guys, I don't think this song is appropriate for that sort of thing. In fact, I don't think *any* of our songs are appropriate for that sort of thing," something's wrong. These people started a slam pit at a general admission concert in an auditorium with no seating--so the people stuck in the middle of it, like me, had no choice but slam or move to the back. We moved to the back. I found out I'm a lot less of a pacifist than I thought--cattle prods and rubber bullets were starting to sound like effective means of persuasion by the time I made my way out.

Well, we hung out on the balcony for a while, but eventually decided the view sucked, so we went back down to the floor and stood in the back. Steve and I could see over the crowd pretty handily (Steve's 6'3", one reason why his fame had spread so quickly--he'd been up in front and pretty visible). Once I got onto the floor I really enjoyed the concert.

TMBG did "Don't Let's Start" from the debut, of course, but no other tracks off of the "pink album" (as I recall, anyway). They did "Purple Toupee" from Lincoln, but *not* "Ana Ng," despite my multiple screaming requests. "Your Rascist Friend," "Particle Man," and "Istanbul (not Constantinople)" sprang forth from Flood. "I Palindrome I" was one of the tracks from Apollo 18, but I can't remember the others. They did a lot of new stuff, including of course "Why Does the Sun Shine?" from the single, as well as "Unrelated Thing," "Extra Savoire Faire" (described by Flansbury as "a song about a guy who's really fucked up from the perspective of the guy who's really fucked up"), and "Thank You for Putting Me Back in My Snail Shell."

The encores (there were three) included "Birdhouse in Your Soul," "The Guitar," "Frankenstein" (the Edgar Winter track), and "Spy," which ended the show with a bang--Linnell directed the band in "shots," by pointing his finger at each bandmember in turn and getting a single, strident note from each, then repeating in semi-random pattern, eventually including the crowd as one of the instruments (*twang* *bap* *honk* "Spy!" *twang* *twang* "Spy!" *hoot* etc.). It was *so cool*. Huh huh. Huh huh huh. Huh.

I discovered that I'll have to work up my endurance if I really wanna cut loose at a TMBG concert, that waiting for the concert to begin can be almost as much fun as the concert itself, that TMBG fans are a talkative and interesting bunch, and that teenage grungoid wannabees can ruin a concert for everyone. The band did *not* play "Stump the Band," and it was obvious how pissed they were at times that a bunch of loud assholes were ruining the show for everyone else. Who lets these people in? I heard the Stanford (boo, hiss) show was similarly plagued, and that the band had to tell the crowders there to chill out, too.

Overall, it was a lot of fun and I am now eagerly awaiting the release of John Henry in September (latest releast date estimate is September 2nd, according to TMBG on the radio the morning of the concert--just in time for my birthday, hint, hint). I've seen Al and TMBG in the space of a month--now I'm goin' to the Cotati Accordion Festival in August to get my fix of accordion music. See you there?

"My wife and I attended the TMBG show at the Fillmore last week. We arrived just before Brian Dewan started singing '99 Cops'. He seemed pretty good and after all the bad press he had received in this forum I was surprised at just how much the San Francisco crowd seemed to like him. He *was* intense. Pretty interesting, but a little grating to my ears. I saw David Immerglück of the Monks of Doom in the crowd.

"Frente! took the stage, and it appeared to me that the lead singer (forgot her name, oh well) just didn't know what to do with her body when she was singing. Her hands just hung at her sides, she didn't hardly move at all. Even when she wasn't singing, the best she did was slapping her thighs along with the rhythm. But then, after a few songs, when we had noticed just how crazy the androgynous rubber-faced guitarist was acting, her lack of motion seemed perfect counterpoint to the guitarist's wild bouncing and surprising facial expressions. In fact, they sort of grew on me after a few songs. The singer's voice is very good, in that sort of 'nice' Edie Brickell / Sundays / Cocteau Twins way. The guitarist (and the rest of the band) seemed like music school weirdos (and I don't mean that as an insult). The music was oddly complex and simple at the same time, leaving lots of room for the guitarist to act silly. He seemed to destroy picks at the rate of about two per song. But the songs had interesting melodic and harmonic structures, the rhythms were often unpredictable, and at times were downright odd! I like it! Reminds me of Frank Zappa (a little), Eskimo (more so), and even They Might Be Giants. I also like the fact that Frente! were not afraid to have some VERY SHORT SONGS. And they pulled off all this strangeness with nary a flinch. Although it seemed the guitarist had to work to keep his face still during the serious songs. All in all Frente! were fun to watch, fun to listen to, and they weren't so polished that you felt there was nothing original happening.

"Not so the Giants. They were falling into those same old ROCK BAND CLICHES. Yes, they had the 'Introducing the band (and let's all jerk off doing solos to show how bitchin we are)' segment. Make me tired. They were TOO LOUD, just because they could. Much of their interesting subtleties were forgone to be more effective as a LARGE ROCK BAND. Not my bag of tricks. Hopefully they will be able to get more subtlety across on John Henry, but Paul Fox is not known for his subtlety in production. In fact one of the things that people don't like about Mr Fox's production of XTC's Oranges and Lemons album is that it seems like they had to throw everything including the kitchen sink into every song. He just doesn't know how to use silence. Overproduced, crowded, and sanded, varnished, and glossed in the Hollywood style. I wish They Might Be Giants luck, perhaps John Henry will in fact be a Most Excellent record. They do have some excellent raw material to work with. 'Snail Shell' is a great song, much akin to 'Birdhouse' or 'Ana Ng', lots of power. 'Dirtbike' has a great melody, as does 'Out of Jail'. 'Extra Savoir-Faire' is hilarious (and a good tune). And there are many other good tunes in the John Henry sampler stack. I'm looking forward to the album. Don't get me wrong. I don't hate the Giants. I just think they're going in the wrong direction with their concerts, lowering themselves to the lowest common denominator. But I must say in Their defense that They were well-rehearsed, Brian Doherty is a good drummer, the horn arrangements were pretty good, and they have a lot of energy. I just don't like the cliched stage presentation and manners, the need to be as loud as possible, and the lack of subtlety. Oh, by the way, They had some great T-shirts, although we didn't buy any. Last time we picked up two, but this time... (We are moving soon and we own too damn many T-shirts.)