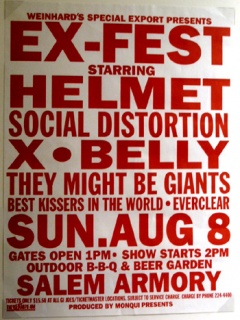 Setlist: (Incomplete! and likely out of order)

I remeber this show. Me and my X went to it to se TMBG (instead of the Grateful dead at Autzen). Social Distortion, Helmet, X, Everclear, Belly and TMBG is all I can remember. The whole crowd was Bouncing back and forth for TMBG (which rocked the F out!!). Helmet was awesome, Everclear was really good (before the hit single, and bleached hair), social distortion were really raw, and X were the best! oldschool punk but laid back groove. I have 1 picture from outside before the show. (I had to piss really bad for 1 hour waiting in line.)

I worked production at this event. I have been looking for a copy of this poster for many years. I would be very interested in buying an original or a copy of this show poster! please contact jkowalis@msn.com

It was called the Ex-Fest, but it could have been called Salempalooza.

Seven bands that cross the spectrum of alternative music filled the Salem Armory on Sunday. And considering the stature of the bands that played later in the day, it was difficult to pinpoint who the actual headliner was.

Helmet, Social Distortion, X, Belly, They Might Be Giants, Best Kissers In The World and Everclear each had their high points, making the day a concert worth remembering for the estimated 3,000 people who attended.

The crowd favorite played early in the day. The quirky, diverse sounds of They Might Be Giants brought cheers from the audience.

Who would have expected it, considering the media hype some of the other bands have received?

And who would have thought the crowd favorite would be a band whose instrumentation included accordion and clarinet?

For one song, the Giants drummer pulled out a small box with pieces of metal attached to it.

"The glockenspiel, perhaps one of the most mysterious of rock instruments," Giants guitarist John Flansburgh said.

It wasn't the only odd thing the Giants did. One song was basically the lecture you heard about the sun in your junior high science class set to music.

The crowd didn't seem to mind this blend of silliness and science, cheering the band on.

Fans also got a treat as Flansburgh signed autographs at the T-shirt concession stand after the set.