From This Might Be A Wiki
< Shows
1 wikians attended: Farmham 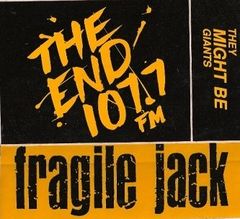 They Might Be Giants
Kitsap County Fairgrounds in Bremerton, WA
August 7, 1993 at 12:00 PM

TMBG performed as part of Endfest, held at Kitsap County Fairgrounds in Bremerton, WA. The lineup of bands, in order of appearance:

They Might Be Giants were goofy and great. Who else can sing "The sun is a mass of incandescent gas" and have the crowd dancing?

They Might Be Giants suffered from equipment problems. Guitarist John Flansburgh fought with his guitar amp for most of the set. And the band's clever but eccentric material fell on some less than appreciative ears. Still Flansburgh and partner John Linnell could have a lucrative career a little farther down the line as smarmy cruise-ship singers.