From This Might Be A Wiki
< Shows
1 wikians attended: Giants Jubilee Mightathon 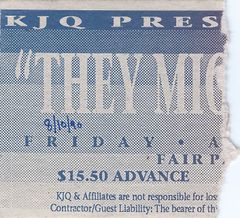 "Kiss Me Son Of God" was changed to "Kiss Me Son Of Man" due to the high population of Mormons in the area and that the song with the original lyrics would be seen as offensive by many. -TitanicFog

Hold onto your fezzes, folks, it looks as though 1990 might be the year of They Might Be Giants.
Already the duo has recorded the year's best album, "Flood," and Friday night, Brooklyn's self-proclaimed "ambassadors of love" put on what is certainly the year's best live show (I said it, you didn't).
It looks like the next step for the two Johns (Linnell and the bespectacled Flansburgh) is to win over the prized place of most-adored pop band from the New Kids on the Block, which isn't going to happen soon, unfortunately.
Like fellow avant-pop artists Depeche Mode (or is that Depressed Mood?), the duo utilizes taped instrumental portions to flesh out their sound onstage. However, unlike the aforementioned atrocity, TMBG does actually seem to perform live (instead of lip-synching).
For example, to give himself a breather, guitarist Flansburgh relied on the strong taped instrumentals and Linnell's polka-styled accordion playing for his "Put Your Hand Inside the Puppet Head," while singing "awesome guitar solo" during an instrumental break.
However, the two are talented musicians and wield several instruments apiece. For example, on "Lie Still, Little Bottle," Linnell seared on baritone saxophone, while Flansburgh took on the unenviable task of playing two trumpets at once.
Such goofy onstage antics shouldn't surprise many of the band's dedicated followers, especially in light of some of the duo's more loony lyrics (such as "What's the sense in thinking about the tomb when you're much too busy returning to the womb?" from "Shoehorn With Teeth").
What is surprising, though, is the directness of some of the statements in the pair's later lyrics, such as "Your Racist Friend," a ringing condemnation of bigotry.
For the most part, the duo was lighthearted and seemed to enjoy performing live, although the taped instrumental backups weren't sophisticated enough to allow the pair to engage in some of the pantomime and unusual dance styles well-documented in their videos.
And while many may have been disappointed that TMBG played for only a little over an hour, it should be remembered that Linnell played an awfully long time on accordion, not exactly a marathon instrument.


Who cares, anyway, since their 70 minutes of twisted pop nirvana was more than able to soothe any nerves enraged by the unoriginal pablum that passes for pop music these days?

"They Might Be Giants 'Flood' Utah with obscure tunes in S.L. concert" by Lori Buttars
The Salt Lake Tribune, Aug. 13, 1990:

To experience They Might Be Giants in concert is to expect the unexpected. Take the band's song "Someone Keeps Moving My Chair," for example.


Put these words, sung by two not particularly good singers, to some wild and crazy accordion music and you would expect to have a horrible time, but Friday's They Might Be Giants performance at the Fairpark Coliseum was nothing but fun.


To date, this wacky duo, John Linnell and John Flansburgh from Brooklyn, N.Y., have made only a few legitimate hits including "Birdhouse in Your Soul" and a remake of the Four Lads' "Istanbul (Not Constantinople,)" from their third album "Flood."
But did they do the expected thing and wait to perform these more popular songs during the concert's big finish? No, they sandwiched them in the middle of their 24-song, hour-long set. Part of They Might Be Giants' appeal is the wide variety of musical styles they incorporate into their songs. The two performers had the audience square dancing to country laced tunes like "Cowtown" and "Lucky Ball and Chain" and twisting '60s-style to the appropriately titled, "Twisting."


One thread of consistency running through They Might Be Giants' songs is the duo's nasal-sounding vocals. The pair also accompanied themselves on a number of unusual instruments that made for some captivating sights and sounds. Linnell's proficiency on the accordion added a merry-go-round feel to "Particle Man" and Flansburgh's talent for playing two trumpets simultaneously was exhibited on "Lie Still, Little Bottle."