From This Might Be A Wiki
< Shows
1 wikians attended: UlyssesSGrant 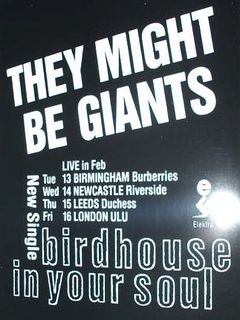 They Might Be Giants
— with Popinjays, The Trash Can Sinatras opening —
University of London Union in London, UK
February 16, 1990

Review from Gigbook via Blogspot

"This mad little two piece, backed up on rhythm by a ticking plinth-mounted metronome (!) were totally amazing! A headlong clash of cultures, styles, unorthodox noise and lyrics, played with humour, verve and huge talent by the two Johns, wielding guitar and squeezebox accordion respectively. What a strange, offbeat pair of Brooklyn boys, but what a great gig!" -David Rose

They Might Be Giants take a perverse delight in toppling perceptions of what a rock band should be like. Strolling on stage like Sophomores back from vacation, the two Johns, Flansburgh and Linnell, looked unsettlingly normal.

Yet the band inhabit the same "gee, what a weird bunch humans are" territory claimed by Talking Heads, except that they do it with laughs. Their faux-naif lyrics could have been scribbled on the backs of envelopes and then posted to the wrong address. It is hard to decide whether they are incredibly smart or just plain dumb.

Do not be fooled by the mock philosophical stance, though the band throw up some infuriatingly catchy tunes. They betray a dazzling variety of influences, from head-turning psychedelia in the chart-bound single "Birdhouse in Your Soul" to driving country rock in "Lucky Ball and Chain".

However, they are not above throwing in the odd polka and, perplexingly, the underlying feel is that of the music hall "Istanbul (not Constantinople)" and "Shoehorn With Teeth" are pure vaudeville.

Recreating the hyperactive, many-textured sounds the band achieves on record would be near impossible, so they do not even try. Instead, they use backing tapes to add a pounding bass-heavy rhythm section to the pared-down guitar and accordion, topped up on occasion by those lesser-known rock instruments: the bass sax, metronome and big bass drum.

Such reliance on pre-recorded tapes might have resulted in a mechanical, soulless parade of musical trickery, but they manage to avoid this by reinterpreting the songs a broad selection from the new Elektra album, Flood, as well as from older Indie albums to exploit the strengths of live instrumentation.


Neither do they need lessons in stagecraft. Guitarist Flansburgh bounces like a hyperactive Clark Kent puppet; while Linnell is a sardonic, static presence behind his oversize accordion. It is not, in any case, the easiest instrument with which to perform on-stage gymnastics. The audience, at times unsure whether to laugh or dance, somehow managed to do both.