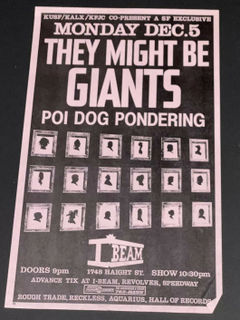 "Ok, then they ripped apart the stage and set it back up for They Might Be Giants. Nothing new here, almost nothing on the stage except monitors and the guitar amp. Same old heads hanging above the stage (but the middle one was too low and John Flansburgh hit his head on it three or four times). They came out after about 45 minutes (it was midnight by this time).

"They started off with the standard taped intro, and then did 'Ana Ng'. After that they started taking requests, alternating between songs that they had taped backup for, and songs they just played. Basically, the same show they did last time thru the BayArrhea. Lots of fun, in any case, even when John Linnell slipped and fell down during his accordion solo (looked like it mighta hurt a bit). John F. played lots of distorted and out-of-tune solos and let an audience member pick a solo. It sounded terrible, what fun.