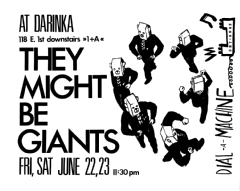 The poster for this show—and the show that occurred on the previous day—was reproduced in a TMBG newsletter with the following text: