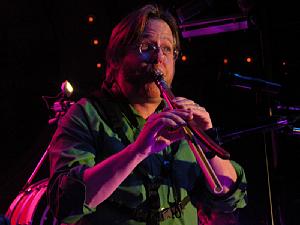 Ralph Carney (January 23, 1956 – December 16, 2017) was a legendary multi-instrumentalist, best known for his horn work with Tom Waits. He joined They Might Be Giants onstage for tours in the fall of 2009.

Carney was a founding member of the experimental new wave band Tin Huey, from the Akron, Ohio scene that also featured Pere Ubu and Devo. He played on albums by Pere Ubu's David Thomas, The B-52's, Elvis Costello, Jonathan Richman, and many others.

Carney died on December 17, 2017, at the age of 61, from head injuries sustained falling down steps in his home in Portland, Oregon, the previous day. He is survived by his partner Megan Hinchliffe, his daughter Hedda, and nephews Patrick (drummer for The Black Keys) and Jim.[1][2]