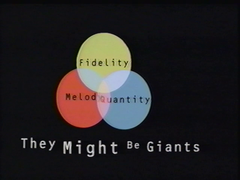 The Power Spheres in action, as seen in the Apollo 18 promo

Power Spheres refers to the three key aspects of TMBG's music: Melody, Fidelity, and Quantity, all of which the band provides with excellence.

The idea seems to have originally been formulated for the Apollo 18 promotional video as seen to the right. The phrase was later used to title the TMBG compilation A User's Guide To They Might Be Giants: Melody, Fidelity, Quantity.

A canonical example of egregious power spheres misuse can be found in Wind Chime, in which the power spheres are made subordinate to a wind chime.