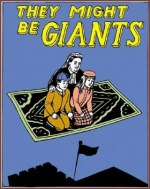 Drawing by Michael for TMBG

Michael Kupperman is the illustrator who created the artwork for the cover and liner notes of Long Tall Weekend, in addition to designing a TMBG shirt.

His illustrations have been published in all kinds of newspapers and magazines, including McSweeney's. He has been publishing his own comic books since 2000, and did cartoons for "TV Funhouse" on Comedy Central. In 2009, Kupperman did the cover artwork for a comic anthology. Curiously, the book's cover greatly resembles that of Long Tall Weekend.