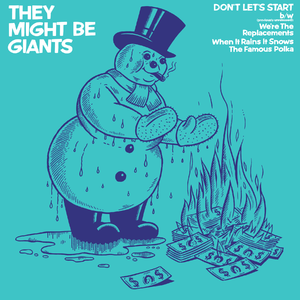 Mark Mazut is credited with having created the iconic snowman artwork for the Don't Let's Start EP.

According to John Flansburgh, the snowman burning money was entirely conceptualized and illustrated by Mazut, and was inspired by the running snowman clip art from the Pink Album's lyric sheet.

According to Barbara Lipp, the snowman came from an illustration in an educational children's book used by MacMillan Publishing, where she worked with Flansburgh. Lipp states that Flansburgh apparently copied and modified the snowman without permission and added the pile of burning money. The original artist was later notified of the use of the snowman, and according to Lipp, "thought it was very funny".