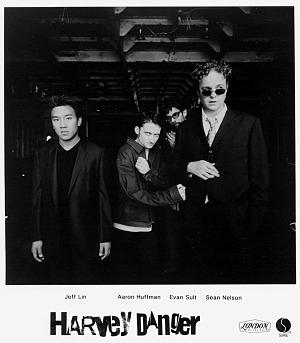 Harvey Danger was an alternative rock band from Seattle, Washington that had opened for They Might Be Giants a few times in 1998 and 2007 prior to their breakup in 2009. The band formed in 1992, and since then Harvey Danger has released three full-length albums and a number of EPs and singles. At one point they were signed by Barsuk Records for their Little Round Mirrors EP. John Roderick of The Long Winters played keyboards during their 2000-2001 tour.

John Flansburgh directed the Harvey Danger video for "Private Helicopter," off the album Where Have All the Merrymakers Gone? which was released in 1997. The music video was shot on the ground. According to rumor, Flansburgh's directing of it came about after the 1998 Bumbershoot Festival when TMBG and Harvey Danger went bar hopping and apparently hit it off.