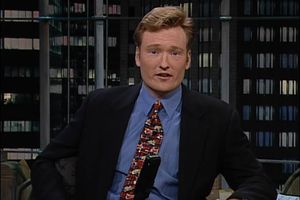 They Might Be Giants have appeared frequently on shows hosted by Conan O'Brien. Conan and longtime sidekick Andy Richter are fans of the band, and both appeared in Gigantic.

John Flansburgh was asked about TMBG's relationship to the host in a 2018 interview with Sam Ash[1]:

They Might Be Giants has been Conan O’Brien’s musical guest more than any other band, correct? 14 Times?

Yes! I think we will go down in the history books as the Tony Randall of musical acts for Conan O'Brien.

Where did that friendship and fandom start and how did it evolve into you being asked back so many times?

We had been on the Letterman show as a sub band a few times; some very famous acts canceled last minute and we were just a subway ride away so there was already a notion that we were around and available [for Late Night] if somebody canceled... we would end up subbing because we were cheap and cheerful and that just began the bookings that would end up being a regular part of our schedule.