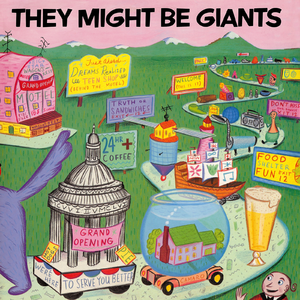 Rodney Alan Greenblat created the charming cover art for They Might Be Giants' eponymous debut. John Flansburgh contacted Greenblat without any prior connection, and asked him to create the art essentially without payment, since the band had virtually no budget. Having heard of the band, Greenblat benignly agreed. Of TMBG, he says "I met John and John in 1985, when they asked me to do the artwork for their first album. It was one of my first illustration jobs ever. I have always felt a connection between their music and my artwork. Still funny, quirky, personal, original rock."

Linnell: "When we put out our first record, there was some confusion, because the cover was this wonderful illustration by Rodney Alan Greenblat: sort of a cartoon landscape with me and John and all these cartoon figures and stuff, and people mistakenly thought that it was a kid's record."

Greenblat also designed all the characters for the popular video game PaRappa the Rapper and the sequel, UmJammer Lammy. He did the album cover for Shonen Knife's Strawberry Sound. He writes and records his own music as well.