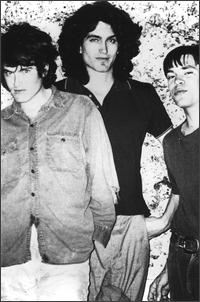 The Meat Puppets are a cowpunk band which formed during the mid-80's. They Might Be Giants sang back up vocals on the song "White Sport Coat", which appeared on the 10" single Raw Meat and the CD single Backwater. Lead singer Curt Kirkwood also drew some very trippy t-shirt designs for TMBG, which later proved to be popular with fans (example here).

They Might Be Giants recorded a horn-filled version of the Meat Puppets song "Whirlpool" for the Why Does the Sun Shine EP.