Hi - I'm Tom, born in 1967, "found" TMBG in 1987 or 1988 when Don't Let's Start was on MTV's 120 Minutes, first saw Them in 1989, and have seen about 30 shows. I bothered John Linnell once after a show to get an autograph in the days before it was really okay to do so, apologized at the time, and still feel bad about it. I was lucky enough to see Monopuff once, and a State Songs show once. I live in a leafy western suburb of Boston and work in Lincoln. In April 2010 I brought my 3-yr-old son to see TMBG at a free outdoor show; he complained for most of the show, but I wanted to make sure he had the chance. Love the music and probably always will.

<p> John Flansburgh was friendly at the Hatch Shell show in July 1998. <p> 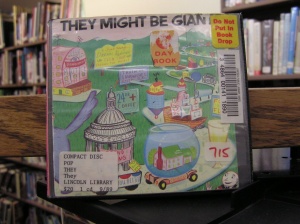 A photo of mine from the Lincoln MA library.
Retrieved from "https://tmbw.net/wiki/index.php?title=User:TomInBoston&oldid=208402"