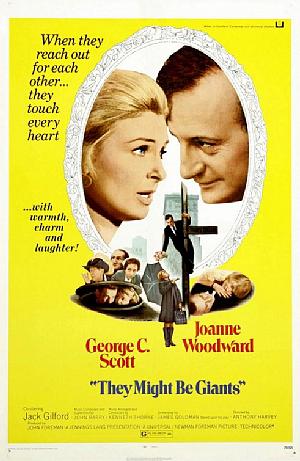 They Might Be Giants is the name of a 1971 movie from which the band They Might Be Giants gets their name. The reference is to the Cervantes character Don Quixote and his penchant for tilting his lance against windmills, thinking that "they might be giants." According to his brother Paxus, John Flansburgh has never actually seen the movie, but thought that They Might Be Giants was a good band name[1].

The movie starred George C. Scott and Joanne Woodward. The screenplay was written by James Goldman, based on his play of the same name (staged in London in 1961).

They Might Be Giants chronicles the adventures of Justin Playfair, a former judge and lawyer who believes himself to be Sherlock Holmes. The movie's opening scene finds Playfair's brother attempting to have Playfair committed. Enter Dr. Mildred Watson, who sees in Mr. Holmes unbridled powers of observation and judgement. Holmes' (George C. Scott) diagnosis is as "a classic paranoid," according to Watson (Joanne Woodward). Fascinated, Watson visits Holmes in his home laboratory, where she enjoins Holmes' quest to discover "Moriarity," the great detective's nemesis ("If I am Holmes," he proclaims, "then there HAS to be a Moriarity"). Through referential and abstract thinking, Holmes pursues a number of "clues" with Dr. Watson in tow, encountering a number of 'characters on the fringe,' including an elderly couple maintaining an isolated rooftop garden, a basement librarian, and a bag of trash in Times Square (don't miss George C. Scott wrapping himself around the head of the George M. Cohan statue there). One notable scene finds Holmes and Watson in the back of a taxicab: Holmes produces a flask of liquor, and proceeds to explain to Watson why Don Quixote "took it too far," in believing every windmill was a giant.

He thought that every windmill was a giant.  That's insane. But... thinking that they might be, well... All the best minds used to think the world was flat. But, what if it isn't?  It might be round! And bread mold might be medicine. If we never looked at things and thought of what they might be, why, we'd all still be out there in the tall grass with the apes.

The film escalates until, in a scene that was cut by the studio in the original release, a supermarket brawl between the host of fringe characters and the police destroys most of a Pathmark. 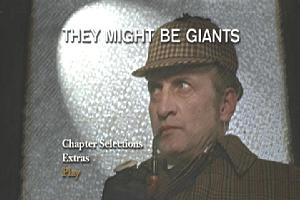 The DVD menu for the film 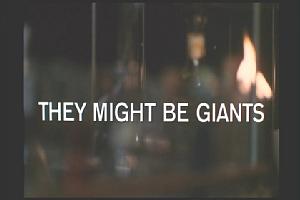 A shot from the title sequence