From This Might Be A Wiki
< TMBG Information Bulletin Archive 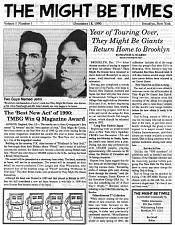 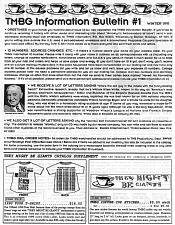 Year Of Touring Over, They Might Be Giants Return Home To Brooklyn by Francis X. Scarbo, Special to The Might Be Times

BROOKLYN, Dec. 17-After thirteen months of touring in support of their hit album "Flood", They Might Be Giants have returned to their beloved Brooklyn to enjoy some well deserved rest and relaxation.

Having just completed a month long tour of the Pacific, with stops in Hawaii, New Zealand, Australia and Japan, the band will play four shows at Greenwich Village's historic Village Gate night club on December 30th and 31st, before beginning several months hiatus from touring. Their next big project will be to write and record the songs for their as yet untitled fourth full length album, which should be released early in 1992.

Beginning with an unadvertised show at New York City's legendary CBGB's last November 15th and ending last Monday in Osaka, Japan, the band's tour lasted over a year. During that time they performed for over 150,000 people, playing approximately 160 concerts in 28 states, the District of Columbia and 14 foreign countries.

Reports from Japan suggest that the two Johns are on the verge of being a very big success there. "Screaming mobs of teenage girls were chasing them through the streets," said the Giant's manager Jamie Kitman of the Hornblow Group USA Inc. "It was like something out of 'A Hard Day's Night'", Kitman added, referring to the 1964 film starring the Beatles.

While they're waiting for the next album of new material, the band's fans can look forward to the upcoming release of a collection of singles, b-sides and previously unreleased material, "Miscellaneous T". Scheduled for releasde in the late winter or early sring of 1991, the collection includes all of the songs from the group's first three EP's on Hoboken, New Jersey's tiny but influential Bar None Records label. It will also feature several songs which have never before been released in the United States.

The start of work on a new album is welcome news for aficionados of They Might Be Giants' free Dial-A-Song service, because once the recording of the album is in progress they'll be abler demo r demo versions of the band's new songs months before the new album is ready to be released.

Dial-A-Song, started in 1984 as a way for the band, who had no record deal at the time, to get their music heard. Although the group is now signed to a major record label, Elektra Entertainment, and their albums are widely available in record stores, Dial-A-Song continues to be a popular institution among their many fans.

Unlike the "900 numbers" of celebrities such as baseball star Jose Canseco of the Oakland Athletics and the massively popular bubble gum group The New Kids On The Block, there is never any extra charge for calling Dial-A-Song.

The 'Best New Act' of 1990: TMBG win Q Magazine Award London, England, Dec. 12-The results are in from Q magazine's first annual "Q Awards" and the "twin quasars of rock", They Might Be Giants, have been chosen as the Best New Act of 1990. Q, one of the leading British pop music magazines, instituted the awards this year to honor deserving musicians and records in several categories. The "Best New Act" is chosen by a vote of the magazine's readers.

Building on the runaway UK chart success of "Bird house In Your Soul" the first single from their Elektra album "Flood", and a series of sold-out concerts this summer, the Giants have become a favourite among British rock fans. "Flood" has sold close to 100,000 copies in the UK, earning the band a British Silver record.

The award will be presented at a ceremony here today. The band, cuurently in Japan, will not be in attendance. The award will be accepted on their behalf by record producers Clive Langer and Alan Winstanley, who produced four of the nineteen songs on "Flood" including "Birdhouse In Your Soul". The other fifteen tracks were produced by They Might Be Giants themselves.

Although the band was formed in 1983 and first played in Britain in 1987, they are still considered a new act there because it was only in 1990 that most Britons first became aware of the band.

THE MIGHT BE TIMES
is published occasionally by
TMBG Information
P.O. Box 110553
Williamsburgh Station
Brooklyn, NY 11211