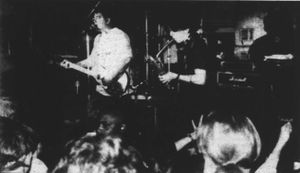 From The Wooster Voice: The crowd roars while T.M.B.G. perform last Saturday at Party on the Green.

This show was billed as "Party on the Green" by the College of Wooster. Before the show, They Might Be Giants were interviewed by Jennifer Campana, the press relations director for WCWS. The interview has been transcribed at /Interviews.

The time has finally come. They Might Be Giants will be arriving in Wooster tomorrow for the long-awaited Party on the Green. Pere Ubu is the opening band for T.M.B.G. and they will start the show at 8 p.m. Both bands have drawn exceptionally large audiences on the tour thus far. Each is distinct in its sound, creating a nice variance in performance.
Pere Ubu, a Cleveland-based group, has been performing for over eighteen years and still maintains the original ideals of the band as they were set in 1974. Pere Ubu has always endeavored to keep a clear vision of what real rock ought to be, creating original pieces that have a seminal influence. The quirky "Story of my Life," Pere Ubu's new release for 1993, exemplifies the band's adherence to originality. The album appears on the band's new label, Imago. Lead singer David Thomas' moans, cries and whoops compliment many of the compositions within this album. Many of the songs in "Story of My Life" have a laconic sound that is skillfully played up with the use of metaphorical meaning. These tunes will be an awakening introduction to the long-awaited:

They Might Be Giants, originally from Brooklyn, have been touring since the spring of 1992. Their current lineup features John Flansburgh, vocalist, also on electric guitar and glasses, and John Linnell, vocalist, on accordion and sax. Performing with them on tour are Tony Maimone on bass, Kurt Hoffman on keyboard and sax, Steven Bernstein on the trumpet, and Brian Doherty, a former member of the Silos, on drums and the glockenspiel.
T.M.B.G. have toured in Japan twice, made numerous trips to Europe, and consistently tour throughout the United States. The group is currently on their September tour in support of their latest release, "Why Does The Sun Shine?" This song was originally from a 1959 educational record called "Space Songs." This CD also features a tribute song to southern rock with the group covering the Allman Brothers hit "Jessica." They Might Be Giants will travel directly from their Cincinnati stop to perform at The College of Wooster. They will then be heading on to places such a North Carolina, Georgia, and Tennessee to perform at Vanderbilt.
Dial-A-Song-Service, created for the loyal followers of T.M.B.G., is a regular charge call that previews new and unreleased songs. It is the tenth anniversary of this service. It attracts callers from all over the country who are interested in updating their current collection of T.M.B.G. hits.


In 1990, T.M.B.G. won the MTV Breakthrough award for their video "Istanbul (Not Constantinople)." This is one of ten videos they have made. T.M.B.G.'s success was prominent in Britain in 1990 as well, when they hit the top ten national charts with "Birdhouse In Your Soul." The band also has an upcoming Elektra album featuring brand new songs including "Spy" and "The Sun," coming out around New Year's Day. T.M.B.G. has released nine albums since 1986 and they have continued to grow in their musical skill with every new release.
Flansburgh and Linnell have had numerous television appearances, including three interviews on David Letterman, two Tonight Show appearances, and a debut on the Today Show.
T.M.B.G.'s musical flavor is unique with the wide array of instruments used in all of their songs and they have attained high recognition for Linnell's talent, playing the accordion. The lyrics are somewhat bizarre and humorous with a passion felt for the world around them. Together with T.M.B.G.'s opening band, Pere Ubu, the Wooster campus will echo sounds of intense musical talent this Saturday.

Looking back on Party on the Green, They Might Be Giants and their opening band Pere Ubu were literally a smashing success. The crowd went wild in the narrow little tent on the Quad, pushing and shoving themselves as close to the stage as they could possibly get.


Before the concert actually began, live interviews were conducted by two of the management staff at WCWS. Graig Meyer, co-music director for WCWS, conducted an interview with David Thomas and Jim Jones of T.M.B.G.'s opening band, Pere Ubu. The band's quirkiness came out loud and clear in this interview. The interview ended with the duo performing a live acoustic song, followed by a CD give away.
When asked for a description of their music, Thomas stated, "Well, we invented a description years ago and we would call ourselves the avante garage, and people would say, "What does this mean?" We'd respond, "Why, par as in par, king as in king, par-king. We'd continue with these non-sequitors until one of the parties gave up and we never gave up."


Lead vocalist David Thomas, who attended The College of Wooster for one year of his college career, expressed his ideas of music as the ultimate art form. He feels that rock music was to be the language and poetry of the human experience. In regard to rock as art, Thomas feels that it is "best suited to express the hopes and fears and dreams of the culture inhabiting the North American continent."
When asked about other art forms, Thomas stated, "All other art forms are dog spit. Theater is dog spit, cinema is dog spit, ballet is double-dog spit and classical music fails miserably because it has no vocals. Jazz basically fails because the only vocals it has tend to be Age of Aquarius nonsense. And the blues, well, they're a dead form abandoned by their people. So, there you go. Rock music, from our generation, was to be a serious art form and unfortunately we believed that."


As press relations director for WCWS, I conducted the interview with John Flansburgh and John Linnell of They Might Be Giants.