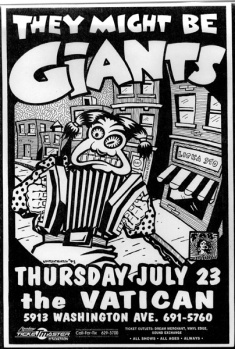 This show was my first time to see Them and it was kind of a disaster. I would be willing to bet that the Vatican didn't have much business before the show and may have been closed down soon after. If you have ever been in Houston in July you will understand. The venue was basically a movie theater with the seats removed. There was absolutely no air conditioning. None. A couple of industrial-sized fans were at the sides of the open area. It was a sweltering situation that only got worse as more people packed into the place.

The opening act was a bore and everyone seemed to hate them. The feeling was apparently mutual because the lead guitarist/vocalist cut off his last song before it was finished and said good night. Another 40 minutes passed and the Johns came out. The music started and after a number of songs the crowd started moshing. Flans took a minute between songs to encourage people to do traditional square dancing instead of dangerous moshing. However, the band was only able to play a handful of additional songs because apparently the fire marshal decided that the place needed to be closed and every one had to leave. Maybe someone fainted. No explanation was given other than Flans apologizing and saying "We have to stop now; it's not our fault, it's not your fault, but it's somebody's fault."

And that was it. I bet they played only about 10 songs. I'm sure John meant that the owners of the place were to blame. Anyway, the Johns didn't return to Houston for years, and I'm sure that night's experience at the Vatican was a big part of it.

I attended this show. Nehushtan is accurate. Yes, it was at The Vatican, and yes, it did get shut down after just a few TMBG songs. Sorry I cannot recall the set list. Except for the final song...
Vatican was on Washington Avenue, giving us yet another place, like Fitzgeralds, Rockefellors, or Satellite Lounge, to see cool music live. Yes, Vatican was short-lived: 1991-1993. This TMBG show may indicate why Vatican did not survive for long.
This show got shut down by the Fire Marshall for having too many people in the building, per Fire Marshall rules. We "heard" that the show had been over-sold. Clubs in this area have a difficult relationship with the people living nearby, due to parking, noise, drunk people wandering around, and trash left behind. So, neighbors will often call the cops on these local venues. Apparently, someone was clever enough to call the Fire Marshall, who surprisingly decided to respond, and saw that the people inside passed the max, and so the show was commanded to be shut down.
I do not recall the warm-up band. Then, TMBG came out, and played just a few songs. Then, JL in kind of a panic says something like, "Apparently, there are too many people in here, and the Fire Marshall is shutting the show down." He apologizes. He also says, with respectful fear, "Sorry, but there are guys right over here with guns telling us to stop the show, so we are going to stop the show..." he then enthusiastically hollers  "...but first we are going to play a final song for you...Edgar Winter's Frankenstein!!!"
And TMBG bust into Edgar Winter's Frankenstein! [you tubes has TMBG doing this, if you have not seen or heard this; I had not at that point, and it frankly blew me away, being kind of a non-sequitur for TMBG, and being excellent.]
They finished, and walked off, backstage. We all got ushered out, and the place shut down for the night. No refund or notice of any re-booking. So, many were disappointed. A bunch of us reasoned that the band might exit out the back soon, so we headed around back. Maybe 30 or 40 fans. Some had albums, I guess hoping to get them autographed.
So, what did we do? We sang TMBG songs together for maybe a half hour! Just us hanging out behind the building that was the Vatican. People began leaving. My group decided we would move on to something else, so we left. I don't know if the band later exited out that way, or met with fans.
I still recall this as one of my most interesting concert experiences, for the cried-out statement about the guys with guns, and for all of us fans together enthusiastically singing "Everybody wants prosthetic foreheads for their real heads," and other TMBG gems, behind the venue.