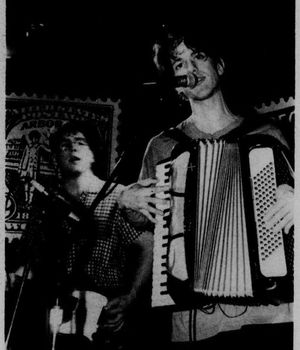 They Might Be Giants performing together at the venue.

While on the road to the 9:30 Club, John Flansburgh was interviewed by Throttle Magazine over the phone. The interview has been transcribed at /Interviews.

"Small Talk with They Might Be Giants" by Derek Thomas
Throttle Magazine, Aug. 1, 1990:


Their first album, sporting such gems as "Rabid Child" and "Nothing’s Gonna Change My Clothes," received considerable college radio airplay in 1987. Their second album Lincoln, leading off with the enigmatic "Ana Ng," landed them a spot on David Letterman. The boys signed with Elektra and released Flood this year, resulting in the unlikely hits "Birdhouse in Your Soul" and "Istanbul (Not Constantinople)."

Throttle spoke with John Flansburgh on his cellular phone as the band headed south on 1-95 to their show at the 9:30 Club last month.