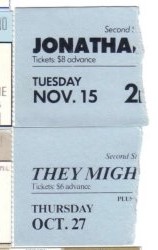 They Might Be Giants
Second Story in Bloomington, IN
October 27, 1988 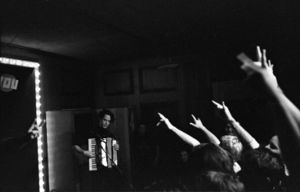 They Might Be Giants performing at the show. (Photo by David Whittemore)

Tickets were $6 in advance.

"They were touring "Lincoln" and their backing tape was having trouble. So they had to wing it for the first few numbers. When they finally got it going (for "Ana Ng") even the guys commented about how bad it sounded." - Lee Lodyga

"The two Johns get the most out of the wide-eyed crowd when they played Bloomington, Indiana in 1988. I like the little smirk one of the John's giving me." - David Whittemore