From This Might Be A Wiki
< Shows
1 wikians attended: Relph 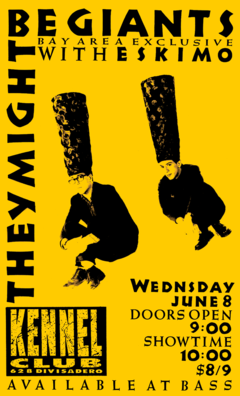 "They played electric, with lots of pre-sequenced parts. Funny, silly, but they've already been described at length in this list. And just whose face is that hanging above the stage? My friend said, about the song 'Why Does the Sun Shine?', 'They could play that song on Sesame Street... they've got all the basic scientific facts down.' Yes, 'The Sun is a mass of incandescent gas/A great big nuclear furnace...' They had a signing at Tower Records in Berkeley, and someone gave them the stick that they used in that night's performance. I talked to John L., and he said it was basically up to either Ryko or ESD to pick up their newest 12" single on CD."

This quirky East Coast duo captivated a sold-out Kennel Club a month ago with their mostly humorous, often heartfelt, twisted pop. Their hit single, "Don't Let's Start," celebrates the joyous dynamics of a short, sweet, catchy pop song. Seeing them live shows you everything else they can do. Eskimo, a recommended local outfit with a xylophone, opens the show. This might be lots of fun. (6/8, Kennel Club, 10 pm, $9)