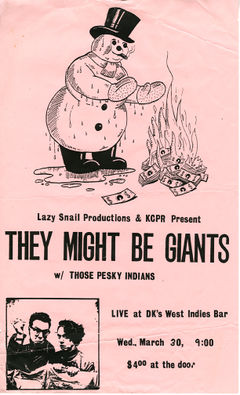 Pop moves into post-modernism with a catchy, but weird duo called They Might Be Giants. And giants they could become in the world of radio, even though their newest single is titled "Don't Let's Start." A main lyrical theme for the band is informational overload, and this is ironically illustrated with their Dial-A-Song. A different They Might Be Giants song can be heard each day by simply calling (718) 387-6962.

The other morning when KCPR called the New York number, a quirky song featuring the band's trademark sound (drum machine, guitar, accordion) combined with lyrics that described a style indicative to them. "It might be eternal, it might be insane," they sang. Whatever it may be, area conoisseurs can experience the group March 30 at D.K.'s West Indies Bar. The band has been known to bounce all over the place. This bouncing quality was evident in the video, "Put Your Hand Inside The Puppet Head," from the group's debut self-titled album. Even on an independent record label, the video received prime-time MTV exposure.


In a December Melody Maker article the band explained some of their musical and visual influences. "The residents are a major influence in what we do," said John Flansburgh. "They did what they wanted strictly on their own terms and found an audience for it." With songs like "Everything Right is Wrong Again" and "Youth Culture Killed My Dog," the group is definitely creating music on its own terms also.