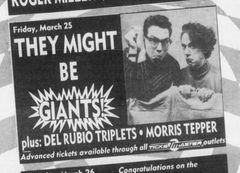 They Might Be Giants
— with The Del Rubio Triplets opening —
Club Lingerie in Los Angeles, CA
March 25, 1988 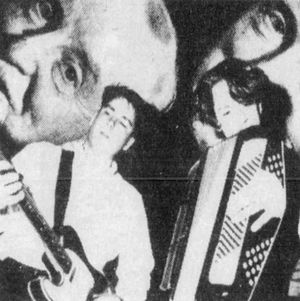 From LA Weekly: They Might Be Giants, but they're smaller than Ike... or is that Fred Mertz? (Photo by Gary Silva)

They Might Be Giants is a New York-based duo that's almost enough to give novelty songs a good name. Not that the typical Weird Al Yankovic fan would likely get and/or enjoy songs like "Alienation's for the Rich," from the duo's wonderful 1986 independent LP debut, or "Kiss Me, Son of God," one of many newer songs premiered in the pair's first Los Angeles gig Friday at Club Lingerie.
Abstract satire aside, John Flansburgh and John Linnell also have a winning way with a pop hook, not to mention a vision of pop society appropriately absurd enough to justify whatever cases of the sillies might come up. And though backing tapes provided most of the music (with the two players adding live guitar, accordion, sax and percussion), TMBG managed to serve up enough bounding energy to satisfy the frat boys who came to hear the better-late-than-never local radio hit "Don't Let's Start."

It's amazing, and refreshing, that a critical sector and a buying public that are so often short sighted or lazy have become entranced with They Might Be Giants, instead of dismissing them as a novelty act. Surely, two grown men (let's call them John 1 and John 2) who have a lifetime of being called "quirky" ahead of them could easily tumble into the Dave Frishberg/Randy Newman miasma of funny, one-joke, pop radio favorites that evaporate as soon as Tiffany puts out a new single.


But They Might Be Giants are a real band, with real songs about real issues ("Pop Culture Killed My Dog" [sic] — not a little chilling, huh?) and a real accordion and a REAL BIG STICK. They even have a real hit single, "Don't Let's Start," that's garnered real words from Rock's Greatest Cliches: "infectious" is the culprit in this case. And their songs are real short so's not to lose the attention of the real enthusiastic hordes of real nerds (not the $250 horn-rimmed "pianos" types) who sort of redefine the Pogo in order to keep up with TMBG.


The guys are so charming, so... er, real onstage, that I couldn't help thinking that all that postpunk anger didn't go whooshing back into the black hole (energy can neither be created nor destroyed) whence it came, but was stuffed, knocking at the sides and desperate to get out, into John 2's accordion. Which is perfectly appropriate and, yes, quirky.