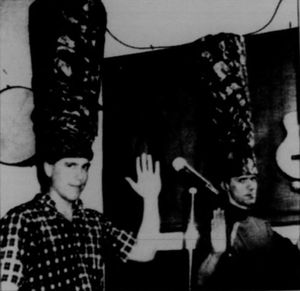 They Might Be Giants at the show, wearing their carpet hats. (Photo by Jennifer Dempsey)

"They might be the oddest pair to make it big in rock" by Eric Boehlert
The Daily Collegian, Feb. 17, 1988:

The time for spreading the news about They Might Be Giants by word of mouth is over. The band has successfully made the mythical jump to the big time. With an MTV video in impressive rotation for their infectious single "Don't Let's Start", along with a CD single, the New York City two man band is well on its way. The band took time out from recording to perform two oddball, sold-out shows at the Iron Horse Monday night.


Quirky bands are doing well these days. The Bobs, the Cucumbers and Uncle Bonsai have all enjoyed respectable success weaving their peculiar tales. TMBG certainly are peculiar, in sight, sound and words.
John Linnell and John Flansburgh don't look like rock 'n roll stars. In fact they look pretty geeky; black glasses, plaid shirts, sorta scrawny too.
TMBG don't sound like rock 'n rollers either. A two man band, if it has the imagination of the Giants, can create an interesting sound. Using at one time or another a guitar, harmonica, drift wood, saxophone and the now ubiquitous accordion, the band anchored its occasionally polka, sometimes thrashing country and always unique rock 'n roll solidly, as the early "Kiss Me Son of God" and "No. 3" showed.


TMBG also had the aid of a tape machine which was used liberally. The reel music provided a fuller guitar sound, drum beats and even a stray tuba note or two.
Flansburgh and Linnell obviously enjoyed themselves on the tiny Iron Horse stage. As kids that never grew up, the two basked in the musical mayhem they created. Whether it's cueing the audience to scream as if it was in hell or donning their now famous three foot, carpet covered head cones, They Might Be Giants are fun and funny.
The band is funny whenever it sings "Cow Town", a song about cattle that live underwater, when it sings the love song "Piece of Dirt", and TMBG would have been even funnier if they had sung the painfully absent "We're the Replacements" ("Rockin' rollin' 'till the break of dawn. Hi, we're the Replacements".)
The band had actually rivaled the real Replacements on a couple of full fledged rockers, including the soon to be single "She Was a Hotel Detective" and the current "Don't Let's Start".


Being grounded in an accordion immediately makes TMBG a welcomed variation to the rock 'n roll rule. On the down side, that approach often wears thin on the ear quicker. That may explain the thin 70-minute set. Perhaps TMBG knows what's best for their fans. But those at the Iron Horse were hungry for more.