They Might Be Giants
First Avenue in Minneapolis, MN
April 13, 1987

Gear Daddies and Rank and File also performed here on the same night.[1] 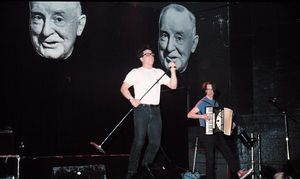 They Might Be Giants performing onstage at the venue.

TMBG's first time playing in Minneapolis was at 7th Street Entry on April 13, 1987. We were used to small venues at the time, but that stage seemed very small and very low. Then we snuck into First Avenue next door with Drivin' and Cryin' playing. That stage seemed impossibly big. It seems Snakefinger played a week before that, Brave Combo two nights earlier. Mojo Nixon & Skid Roper five days later, the Butthole Surfers and Killdozer a week later, then UTFO. While it looks like half the span of indie music then, every two weeks at 1st in '87 looks as diverse.