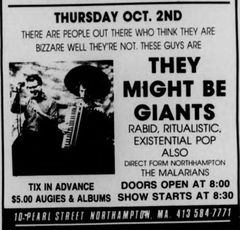 They Might Be Giants
— with The Malarians opening —
Pearl Street in Northampton, MA
October 2, 1986 at 8:30 PM

Tickets were $5 in advance and the doors opened at 8:00pm.

Here are these two guys. John Linnell plays accordion and occasionally baritone sax. John Flansburgh plays guitar, it looks like. They're a kind of rock band, if rock can include Girl Scout songs and show-tune themes along with basic, wailing chrods and dance hooks. They Might Be Giants.


That's the name of the band, you understand. Flansburgh and Linnell, out of Lincoln-Sudbury High School are now residing in Brooklyn, chose their name not because it's a vaguely remembered movie title but simply because they like the sound of the phrase. Their repertoire is created the same way: they've picked various melodies and rhythms with sounds they like, and they've thrown them together to create songs such as "Nothing's Gonna Change My Clothes" (ripped off from another John), "Alienation Is for the Rich," and — every critic's favorite — "Youth Culture Killed My Dog."


They're actually good. It's not that they're brilliant musicians, but they're smart. They know how to write songs that make you listen to the words closely, because the words are funny, and at the same time make you want to dance a lot, because the rhythms are sure-fire boogie stuff. They've been playing plenty in New York (Danceteria, Pyramid), and they've recorded a low-budget, mail-order cassette. (Ray Mason, are you reading this?)


They also have a dial-a-song phone number. Two nights ago, their answering machine at that number tossed up a rendition of They Might Be's love song about a female hotel detective, with a clarinet riff of "Hernando's Hideaway" from the old musical "Pajama Game." A voice, probably Flansburgh's, since it sounded ultra-nerdly, announced that they're about to release a real record too.
Definitely an act to catch, but just because they're unusual, but because — they will hate this — they are in. In People magazine, in Spin, in the Voice, in the Times. And at Pearl Street, this Thursday night. The Malarians open the evening.

New York's They Might Be Giants return to the area this Thursday evening when they bring their infectious, quirky, daring and unpredictable songs and show to Pearl Street in Northampton. This group is building a national reputation, and everyone who hears them likes them. The area's popular Malarians, hot with their In the Cool Room album, share the bill.

Tonight at Pearl Street the doubly awesome They Might Be Giants will be playing for $5. They will be backed up by the Malarians (of last weekend fame). Both bands have just released albums so they'll be putting on good shows, so you'll want to buy their records.