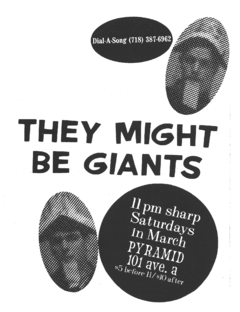 Titled "Let My People Rock" according to the New York Daily News, this show was part of a month-long series of Saturday shows at Manhattan's Pyramid Club, tickets were $5 before 11:00pm and $10 after.

They Might Be Giants, Pyramid Cocktail Lounge, 101 Avenue A, at Seventh Street (420-1590). They Might Be Giants is a prolific, cheerfully eccentric duo of pop songwriters. Every day, the two put a new selection on their Dial-a-Song line (718-387-6962); one recent lilting melody had the lyrics, All I was, was an exaggeration/All I had was an exploding invitation. Now and then, the duo emerges to perform concerts with taped backing tracks; the pair is in residence at the Pyramid every Saturday this month, with sets at 11 P.M. Tickets are $5 before 11, $10 afterward.

Strange Folk ... two Johns (Linnell and Flansburgh) of They Might Be Giants are playing Pyramid Saturdays. The talented duo are known for weirding up their act using cartoon props such as monster mitts or dueling with bread loaves.

"We're not a rock band," Flansburgh says. "We've been called a performance duo, although that makes us sound a lot more heavy than we are."

This Saturday's show is titled "Let My People Rock" and features a live Barbie doll. There will also be one of their famous sing-a-long songs. "It's like Pete Seeger," Flansburgh says. "Everybody holds hands and sways. There are cue cards."