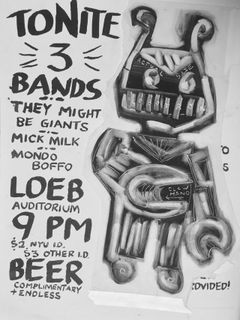 
One of the musicians opening for They Might Be Giants was John Flansburgh's friend Mick Milk, who inspired the band's use of prerecorded instrumentals through his solo acts, where he was only accompanied by his guitar and a backing track. John Linnell talked briefly about Mick Milk in a May 11th, 1994 interview with the Stanford Daily:

John had a friend who was doing a performance with tapes. This guy's name was Mick Milk, and he seemed to actually have a following of people who really liked what he was doing. It seemed like a perfectly viable way to perform — in fact, kind of an interesting way to perform, because you could put whatever you wanted on the tapes, so we pretty much just took our cue from that guy, and started doing our tape show, and we did that show for about 10 years, or almost 10 years.

Information is from a poster TMBG has shared on social media, which appears to be from this show based on venue information but could be from another (undocumented) show at the same venue.