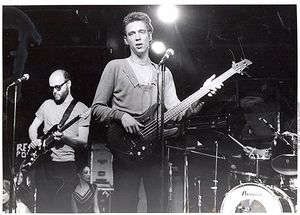 Robert Quine was a pioneer in punk guitar. In Richard Hell's seminal band the Voidoids, Quine introduced previously unheard-of sounds and techniques to the punk movement. He went on to work with Lou Reed, Marianne Faithfull, and Tom Waits, among many others. His searing guitar solos can be heard on "No One Knows My Plan" and "Sleeping In The Flowers".