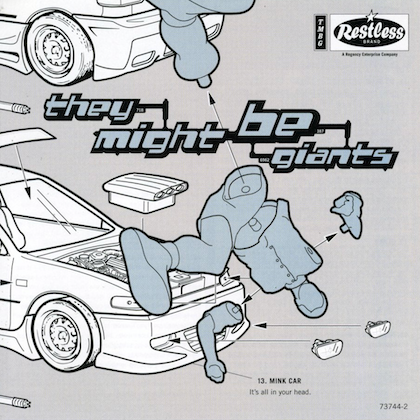 TMBG tour update! Asbury, Pawling, NYC x2, Seattle, Portland OR, Boulder, and Fort Collins all SOLD OUT!
Reserved seating in balconies selling out everywhere!
Shows selling out across the country as we type.
Oakland and LA going fast!

By popular demand: new shows just added! On sale this Friday.
But avoid heartache and use the pre-sale code we'll email you on Wednesday for early access.
Asbury Park http://found.ee/090120
Seattle http://found.ee/100320
Portland http://found.ee/100720ATTENTION RECIDIVISTS
THESE NEW SHOWS are MINK CAR plus FLOOD CELEBRATIONS
On Friday our shows in Asbury Park, Seattle, Portland OR, NYCx2 and Fort Collins sold out within moments. Because scheduling permits, we are now adding second shows in Asbury Park, Seattle and Portland OR. To keep things spicy, TMBG will change the two-set "evening with" program a bit with a spotlight on both Flood and their notorious "lost" 2001 album Mink Car plus an alternate set of favorites to fully satisfy both regular and repeat customers. While they won’t play the complete albums of either Flood or Mink Car, it will still be face-meltingly excellent. 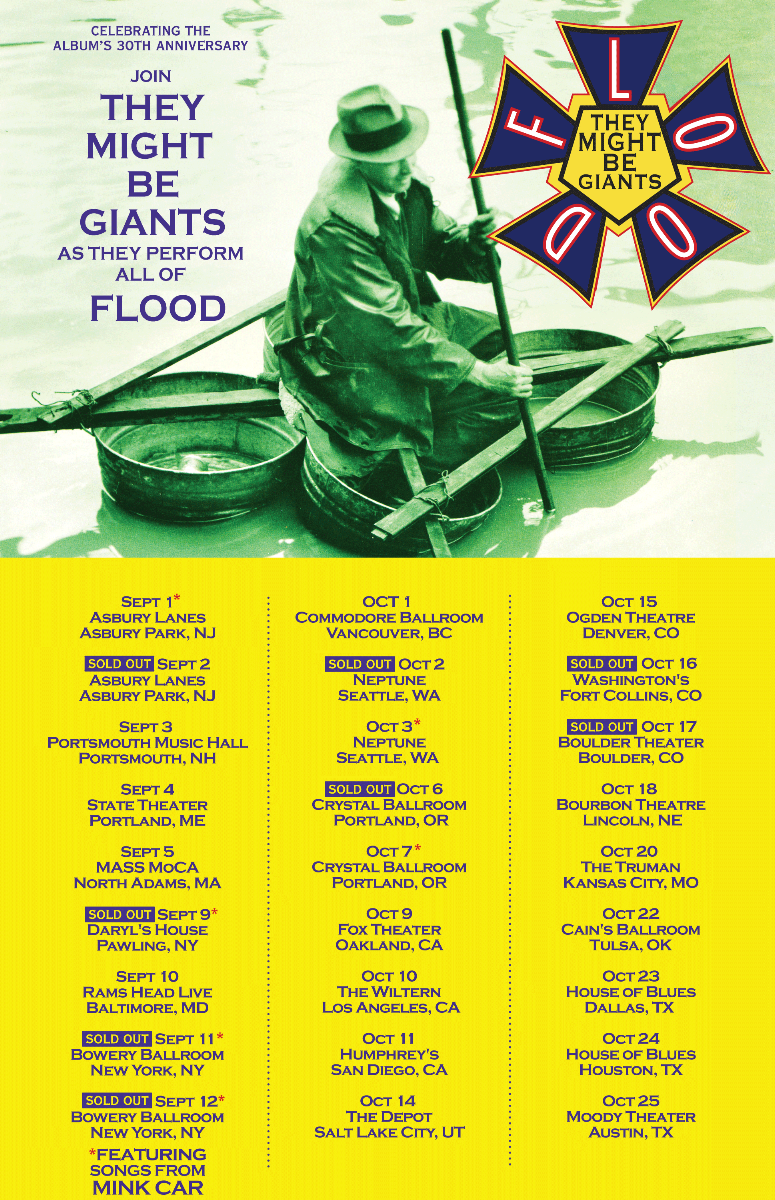 THEY MIGHT BE GIANTS MINK CAR plus FLOOD SHOW CELEBRATION
The show is “an evening with” and TMBG will play two full sets with their electrifying live band featuring the trumpet genius Curt Ramm. The sets will span the band’s entire career from early favorites to brand new tracks, as well as the live improvisations that have become a highlight of TMBG shows.

PLUS the band will spotlight favorites from both their FLOOD and MINK CAR albums. Although the band won't play both albums in their entirety, both established show favorites and the most delicious rare tracks will be wheeled out for all to enjoy.

ABOUT THE MINK CAR SHOWS
This Sept. 11 is the 19th anniversary of Mink Car, They Might Be Giants' notorious “lost” album. With tracks produced with Flood hitmakers Clive Langer & Alan Winstanley as well as Adam Schlesinger of Fountains of Wayne, the album was filled with stand-out tracks like Bangs, Cyclops Rock, Man It’s So Loud in Here, Older, She Thinks She’s Edith Head, and, of course, the title track Mink Car. But the brilliant reception the album seemed destined to have was not to be -- Restless Records closed their doors for business forever just weeks after the release date and the album's rights were instantly entangled in that bankruptcy. Released just a year before the iPod and Napster musical revolutions and with the curious distinction of no physical albums in distribution, the album essentially disappeared. It would be the first and only They Might Be Giants album to go out of print. 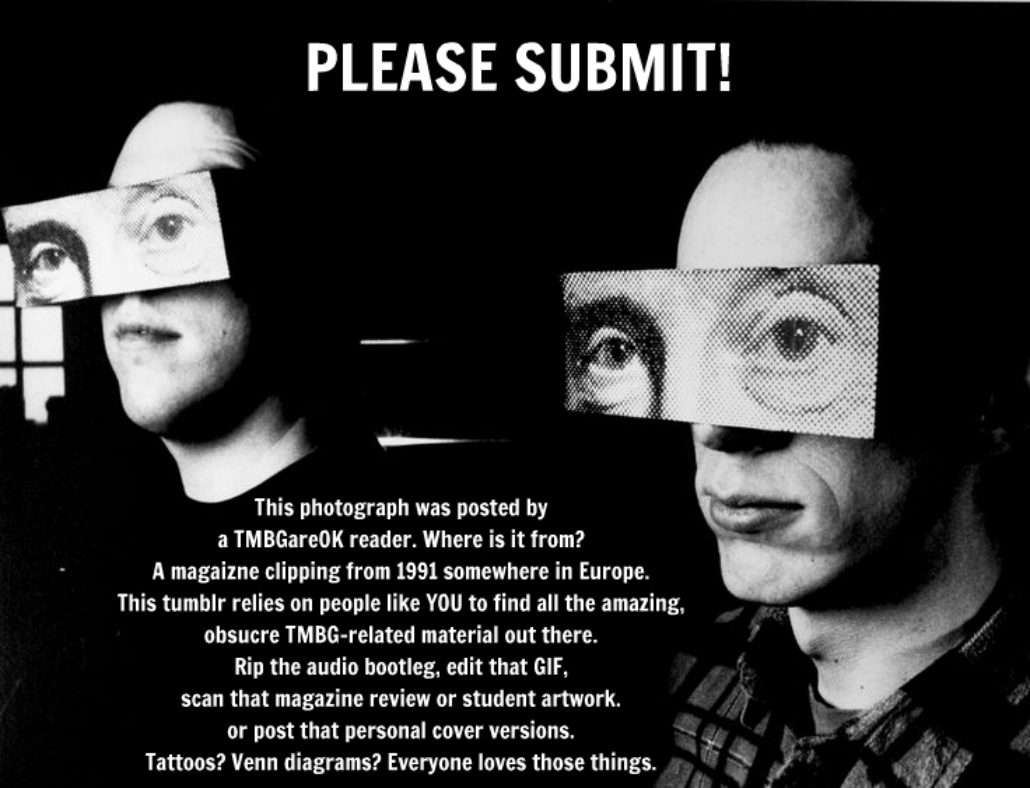 They Might Be Giants wants to see your They Might Be Giants-related posts on tumblr!
Also, TMBW.net, the audience-driven wiki is thriving, and also now on twitter at https://twitter.com/tmbw.
And of course the official TMBG Instagram is up and ready for action. 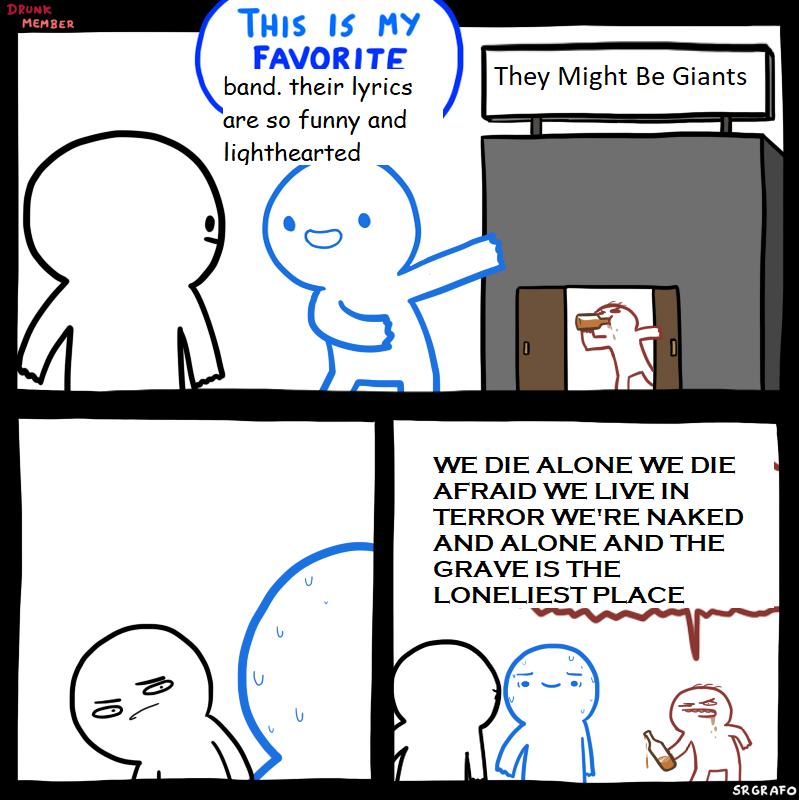 THEY MIGHT BE GIANTS RUNS ON T-SHIRTS and VINYL

There are many beautiful new shirt designs available including the Jackalope, the new Flood shirt, the “all over” First Album shirt, and more. Go here.

The brand new Flood picture disk with the zoetrope on the back? Or in clear green with the deluxe gatefold lyrics? The clear red Lincoln album on 180gr audiophile vinyl?
Or the instant download of the remastered pink album? All of it is right here.