Say nice things about Detroit
remember standing in the doorway
private words and holding hands
can’t you pretend to pretend?

They Might Be Giants are playing so many shows!

SPECIAL BROOKLYN THEME SHOWS!
BROOKLYN NY September 27 is APOLLO 18
A two-set, “evening with” show with a spotlight on the Apollo 18 album.
Music Hall of Williamsburg http://bit.ly/1M0PdxQ
BROOKLYN NY October 25 is HORNTOBERFEST
A two-set, “evening with” show all about the infamous Tricerachops horn section
featuring Stan Harrison on saxophone, Curt Ramm on trumpet, and
Dan “The Machine” Levine on trombone. Music Hall of Williamsburg http://bit.ly/1DkUbUN 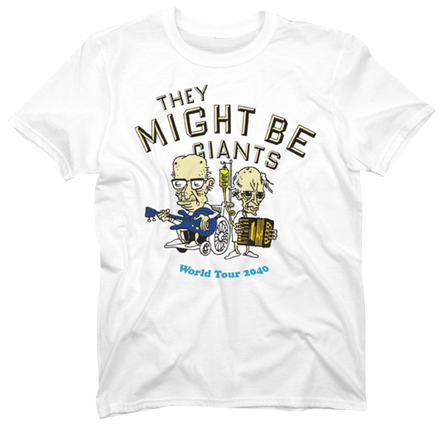 AND SPEAKING OF THE 2040 WORLD TOUR...
Our 2040 World Tour t-shirt is back in stock at the TMBG store.
Check it: http://bit.ly/1F0IXG4
Hey–Glean is shipping immediately in special die-cut vinyl! The Glean vinyl is here. It is a special limited edition die-cut cover.
http://bit.ly/1MpDedI