Even More Super Hits of the Seventies 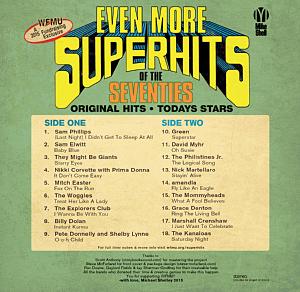 Even More Super Hits of the Seventies is an album compiled by the DJ Michael Shelley for the 2015 fundraiser of the radio station WFMU. It was available with a pledge to WFMU during the station's annual fundraiser beginning on March 8th, 2015.

As Shelley explains in the liner notes, "I approached some of my favorite music makers and asked them to create a recording just for us - to cover a song that went top 40 somewhere on Earth in the 1970s - the one rule was: no irony." They Might Be Giants contributed a cover of "Starry Eyes" by the English power-pop band The Records.