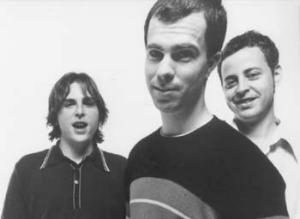 Ben Folds Five is a trio—in spite of the name, not a quintet—made up of Ben Folds, Darren Jessee, and Robert Sledge. The reason for the inaccurate name is, according to Ben Folds himself, “it sounds better than Ben Folds Three.”

John Flansburgh directed the video for their song "Song for the Dumped". Apparently John hung out with Robert, who convinced him to direct the video. In addition, Mark Feldman and Frank London, session musicians for They Might Be Giants, provided violin and trumpet, respectively on Ben Folds Five's 1999 album The Unauthorized Biography of Reinhold Messner.

Darren Jessee's band, Hotel Lights, covered the TMBG song "The End Of The Tour" on Hello Radio: The Songs Of They Might Be Giants.