From This Might Be A Wiki
(Redirected from Andy Partridge) 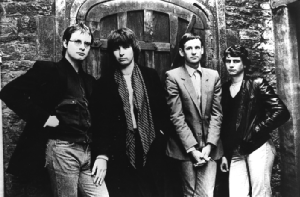 XTC was a Swindon "Beatle-based pop" band immortalized in the They Might Be Giants song "XTC Vs. Adam Ant". The band has had a considerable influence on TMBG: both Johns have admitted being fans, and Danny Weinkauff has acknowledged bassist Colin Moulding as an influence. Andy Partridge, XTC's principal singer/songwriter, issued a solo EP through John Flansburgh's Hello CD Of The Month Club in 1994. One of the tracks from this EP, "Some Lovely (My Brown Guitar)", later appeared on A Hello CD Of The Month Club Sampler, TMBG's Podcast 22A, and in re-recorded form on XTC's final studio album.

They Might Be Giants covered the XTC song "25 O'Clock" on an A Testimonial Dinner: The Songs Of XTC, a tribute album. That song in particular was originally recorded by XTC as their alter-egos The Dukes of Stratosphear. Flansburgh expressed further praise for the song in a 2018 interview with Consequence of Sound.[1]

A demo of an XTC track, "Rip Van Rueben" also appeared on a split flexi-disc with TMBG's "Moving To The Sun" in 1992. The single was packaged with April issues of Reflex magazine. XTC has also appeared alongside TMBG on numerous various artist compilations.