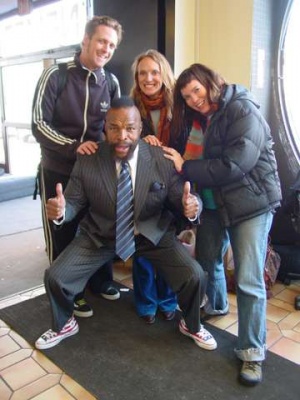 The Last Car with Mr. T

The Last Car is an independent band which includes Robin Goldwasser and Chris Anderson. From the September 20, 2005 newsletter:

We also want to bring your attention to Robin 'Goldie' Goldwasser's new music group The Last Car who are having their professional debut at Joe's Pub on Saturday Nov. 5th. The Last Car is a three person vocal harmony group performing haunted songs on a wide variety of topics including, but not limited to, fireflies, car crashes and the vagaries of romance. Band members include, but are not limited to, Chris Anderson (formerly of Muckafurgason), Robin Goldie Goldwasser and Amy Miles.

The members of The Last Car have a YouTube-based web series, called Meow Meow Music, which spotlights music and cats, as the title suggests. John Flansburgh, his cats, and the They Might Be Giants Instant Fan Club ukuleles were featured in episode 4. The show is hosted by Miles, and Goldwasser and Anderson make appearances as her fictional houseworkers.

The Last Car did some music for Mr. T's television show, I Pity the Fool. Three Mr. T-themed TLC songs appear in TMBG's Podcast 3A. They are called "So Easy To Love", "Running Strong", and "Set Us Free". Another Mr. T-themed TLC song, "Last Name T", appeared in Podcast 7A. In addition, the band held the much-sought-after position of #1 friend on TMBG's Myspace page.

For their live act, the band members trade instruments on different songs. Here's how it breaks down: